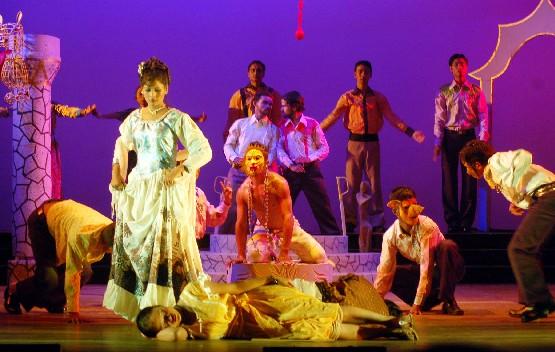 National Institute of Film, Television and Theatre Studies (NIFTTS) performed ‘You Too Brutus’ at Srimanta Sankardeva International Convention Center, Kalakhetra, Guwahati on September 19. ‘You Too Brutus’ was an adaptation of the Assamese translation of William Shakespeare’s ‘Julius Caesar’ by Dr Dinesh Sharma. NIFTTS staged the drama under the aegis of National School of Drama (NSD) Delhi, after a 45 days workshop. Binod Sharma was the concept designer and director of the play. The human race through the ages has created power and desire to dominate and rule. Shakespeare’s evergreen character Caeser was also a sacrifice in the altar of power. The group tried to show a struggle to hold the reign of power to ‘rule’.

26 Apr 2022 - 9:08pm | Jahir Ahmed Barbhuiya
Just after receiving bail, MLA Mevani was re-arrested by the Kokrajhar police as per a new FIR filed against him on Monday. An Assam court on Tuesday rejected Mevani's bail plea in the case in...

8 Jan 2019 - 11:52am | Nava Thakuria
Narayana Super-Specialty Hospital, Amingaon (north Guwahati) will conduct a free health camp for the member-journalists of Guwahati Press Club (GPC) along with their families on Saturday (12 January...