It is worth mentioning that BJP took lead in Nagaon, Raha, Jagiroad, Barhampur,Hojai,and Lumding while Congress party in Morigaon , Laharighat and AUDF in Jamunamukh LAC’s. A total of 9,99,180 votes were polled out of 14,17,609. 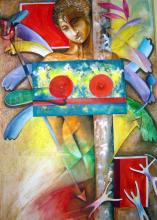 6 Apr 2013 - 12:04pm | Jyotirmoy Kashyap
Sujit Das is an Indian Painter whose chosen field of work took him to the Guinness Book of World Records. Born on December 25, 1980 to Sri Kamakhya Chandra Das and Khama Das, in Bengalipatty, Nagaon...

25 Jan 2018 - 12:39am | AT News
TINSUKIA: At least seven people were feared dead and five others sustained injury when the vehicle carrying them slipped into a deep gorge in Arunachal Pradesh on Wednesday. The incident took place...

18 Feb 2012 - 2:58am | editor
Assam Chief secretary Nava Kumar Das has been admitted to the Guwahati Medical College Hospital on Friday when he complained of breathing difficulties in the afternoon. Doctors attending on him...