One militant killed in Encounter

One unidentified suspected ULFA cadre was killed last night in an encounter took place at Sholmari village under Baihata Chariali PS in Kamrup Darrang Border. According to the police sources Kamrup Police launched ambush in that village acting on specific information. During the ambush Police asked a group of three persons to stop. But the group started firing and tried to flee. When police opened fire then one of them was killed on the spot. Two militants manged to flee. Police has recovered one 9mm pistol and live ammunition from the possession of the killed militant. The militant is yet to be identified but police has suspected him as a ULFA militant. 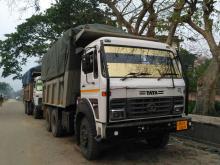