The people of Bahari village and nearby areas like Gomaphulbari, Bhogerpar, Pajarbhanga etc. villages of Barpeta district enraged at the indifference attitude of the Water Resource department as they have been suffering a lot due to the erosion caused by the Brahmaputra river and have to live a uncertain lives. Though the district administration assured to solve their problem, yet the authority delaying the construction work.

This Bahari erosion protection scheme becomes the source of extra income for some of the officers, contractors etc., rather than protection of the people. Last year, though the water resource dept. had tried to protect erosion by installing 'pilescreen', the devastating flood flashed away 4 'pilescreen'. The Brahmaputra has been swallowing one village after another each year, but the government has been showing their back on the problem.

The Deputy Commissioner of Barpeta tried his best on this and sanctioned 22 crore 36 lacs from CRF fund. For first phase of construction of 'stone spur ', the expenditure is 10 crore, 72 lacs and 15 thousand rupees which will be invested and already a some amount has been spent. In spite of discussions with Bahari Erosion Protection Sangram Sammittee, the concerned department ha snot taken any serious step so far. The people of that area also regretted about the low quality work of the contractors.

Due to presser from the people, the administration and the executive engineer of Water Resource dept. of Barpeta Rudreswar Burhagohain assured to complete the erosion protection construction of Bahari area within 20 days, at a special meeting held on May 1 at DC’s office, Barpeta. 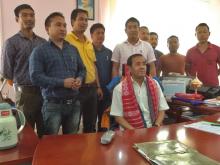 7 Feb 2009 - 2:54pm | editor
An ULFA cadre died at an encounter at Sarthebari area in Barpeta district on Friday evening.According to information, the encounter between the ULFA militants and a team of police and CRPF jawans...