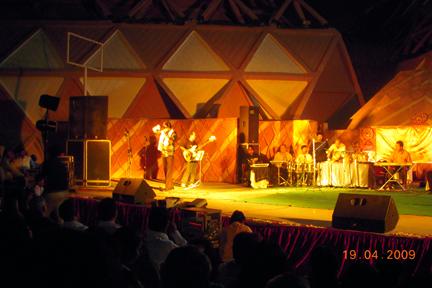 It was merriment time for the Assamese community in the capital who swayed to the reverberating tunes of bihu songs and dance at a mega celebration here. The venue of this year’s main Bihu by the Assam Association, Delhi was Lal Chowk, Pragati Maidan. Far from home but not far away from the homeland spirit, a large crowd of around 3000 people thronged the celebrations organized on Sunday evening.

The affluence and abundant endowment of nature in the Assam valley during this time of the year is rightly reflected in the spirit of Rongali Bihu, celebrated in the first Assamese month of Bohag.

At the celebrations, Assamese child, youth and old, from neighbouring satellite cities of Ghaziabad, Gurgaon and Noida apart from Delhi poured in. 'The gathering is really overwhelming. I am happy to be associated with Assamese people on this great occasion' Mr Jayant Kastuar,Secretary Sangeet Natak Akademi and the Chief guest, spoke on the occasion. There were other guests of honour like Mr N M Bora,CMD, OIL; Mr. H S Brahma, IAS, Secretary to GOI, Dr Atul Sarma, Member 13th Finance Commission, who graced the occasion. Dr Sarma released the ‘Samayik’- magazine of the Association.

A team sent by Culture Department of Assam Government performed bihu towards the end and lifted the mood. 'This is an amazing period for us Assamese. It is simply enjoyment right now and nothing else' said Ms Bina Saikia, a professional who hails from Dibrugarh and is employed with an IT firm at Gurgaon. The finale came with 'mukoli Bihu' when every one danced together once again celebrating the New Year spirit, but in a free for all mode.

The bihu team was taken on next day to the Mother’s International School for a performance before the Primary section students. The aim is to propagate Assamese culture among young people. The team also performed at ‘Disang Club’ of Oil India Ltd, apart from doing a recording for Doordarshan.

Permalink Submitted by tassaduque hussain on Sun, 26/04/2009 - 09:12
Fantastic coverage of Bihu celebrations in Delhi, Congratulations and keep it up. Regards

Permalink Submitted by Kishore Baruah on Mon, 27/04/2009 - 02:14
Congratulations to the organisers for bringing together the Assamese community in Delhi area to celebrate Rongali Bihu.

Permalink Submitted by Pinky Pradhan on Mon, 27/04/2009 - 04:36
It so good to know that we are keeping the tradition and spirit of Bihu alive. Thank you Manoj da , for so beautifully, capturing the programme, even though I couldn't attend it, I feel as if i was there after reading your feature.

Permalink Submitted by Jayantimala Devi on Mon, 27/04/2009 - 05:39
Good, Manoj. But, there is an important omission - you forgot to record the enthralling performance by Abhishruti Bezbarua, an internationally acclaimed upcoming singer from Assam.- Must be an oversight.

Permalink Submitted by Prodip Borkakoty on Mon, 27/04/2009 - 05:57
Thanks Manojda for keeping me abreast of our bihu celebrations Delhi in this distant Land and keeping our JAOTIJUGIYA POROMPORA alive

Permalink Submitted by Mridul Bhuyan on Mon, 27/04/2009 - 08:14
The Bihu Dance presented by Assam Association, Gurgaon should have been mentioned, as association was invited to participate.

Permalink Submitted by Manoj Kr Das on Tue, 28/04/2009 - 03:50
Hi Mridul! It was not the detailed description of the programme..few items were only highlighted due to lack of space.. 'Jogajog' will carry out the list of programmes with credit to all..to Jayanti Baidew..Ms Abhishruti's name is there in the second para..Tc

Permalink Submitted by Jayantimala Devi on Tue, 28/04/2009 - 06:05
Extremely sorry, Manoj! An oversight on MY PART. Did not see beyond the photographs.

Permalink Submitted by maina on Thu, 30/04/2009 - 02:50
Yes chandan you are right. The program was too poor compared to the last year Bihu celebration.

9 Mar 2015 - 7:40pm | Hantigiri Narzary
Expressing serious concern over non implementation of sixth pay commission, 2006 and demanding early release of arrears of the teachers, the All Bodo Primary Teachers Association has decided to...