The election campaign for the 2nd phase of Lok Sabha election that will be held on April 23/09 in Barpeta constituency ended today. Today AGP has taken out a vast election rally throughout the main roads of the town. It looks like AGP will be able to touch the heart of the voters this term whereas congress could not be able to persuade the voters in spite of their level best. On the other hand, the participants of the women folk of this rally or in the election campaign is noticeable. This term the people of this locality do not want congress candidate Ismile Hussain Khan as their leader, because of his former inactivity as an MLA in Barpeta LAC. That is why it is a plus point for Bhupen Roy, the BJP supported AGP candidate to get more votes. On the contrary, the AUDF candidate Abdus Samad also a rival for the congress and the more AUDF break the vote of Congress ,the more AGP will be benefited. As a result there is a great chance for AGP to win the seat of Barpeta constituency. 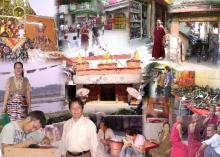 23 Oct 2009 - 10:10am | pallavibarua
New Aruna Nagar, Delhi – 54. One of the oldest Tibetan colonies in India. The settlement dates back to 1959. Being from the North-East, I often hear stories of discrimination of the students...