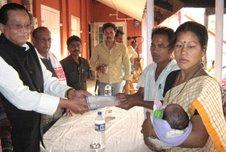 MAJONI a scheme for the girl child under the Assam Bikash Yojuana of Government of Assam was launched yesterday(27-02-09)in Sivasagar by Pranab Gogoi, Hon'ble Minister, Sericulture, Handloom & Textiles and Law, Assam. Under this scheme all new born girl child will get a fixed deposit of Rs. 5000/- on her birth and the same can be en-cashed by the girl child on attainment of 18 years of her age.

6 Aug 2008 - 12:56pm | Nagendra Sarma
Reacting to the demand for autonomous council for the people of ‘char’ areas of 14 districts of Assam by AMSU, North East VHP reacted how ‘AMSU dared making such a secessionist...

Demand for a super fast train from Dibrugarh to Mumbai

12 Mar 2012 - 7:58pm | Jutika Mahanta
“More than my illness traveling became a major issue”, says Mitrakanta Hazarika who hails from Duliajan adds honestly : “While coming we need to travel by bus till Guwahati for...