An encounter between poacher and forest guard took place today afternoon in Abhoyapur Reserve Forest under Charaideo police station in Sivasagar district. According to the information one forest guard named Hironya Baruah injured in the encounter and he was rushed to the Sivasagar Civil hospital for treatment. 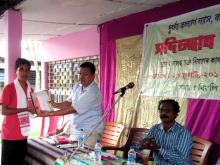 13 Feb 2016 - 9:56pm | Shajid Khan
A Bodo folk cultural group comprising six male and eightheen female artists of Udalguri district has been invited to Bangkok of Thailand to perform in the India Fun Cheer Festival which is underway...