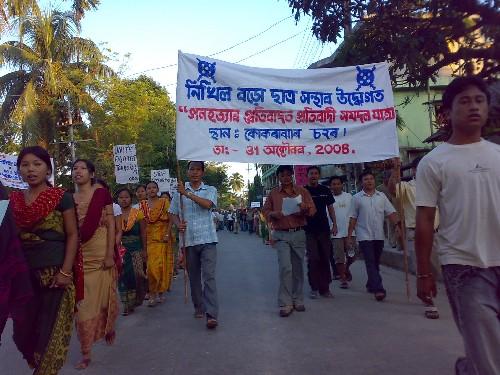 Police of Nagaon district raided a Public Call Office located at Moirabari in Nagaon and seized a good number of illegal documents.Police personnel said to Assam Times during a talk that the SMS which was sent to the television channel News Live through a Reliance mobile SIM card was connected from the raid PCO. Police also arrested several persons from the area in this connection for further questioning. Nagaon police urge all the people to inform the police if any movement of militant groups is observed in the area.

Permalink Submitted by john on Sun, 02/11/2008 - 00:30
A very nonsense act done by the most coward people who have gone mentally ill and who do not know the value of life, God and humanity. They are totally irrational beings who are no better than animals. They do not even deserve to go to hell which is far better than their evil designs, how can they dare to invoke the name of Allah by killing innocent lives. They have killed their own God, the Allah. The mind of the animals are far superior and better than their minds. Hang them Allah will take care of them.This is my genuine request.

21 Apr 2021 - 12:11pm | AT News
Amidst the Coronavirus scare, a group of armed people has, reportedly, abducted three ONGC officials from its oil rig in Lakuwa, Sivasagar last night. As per reports, the abducted have been...

14 Sep 2020 - 1:40pm | AT News
Guwahati: Finally, AASU and AJYCP have announced new regional party 6 months ahead of assembly polls. A day after a brainstorming session of the two influential student and youth organizations...