3 May 2019 - 11:44am | AT News
PURI: As many as 250 pilgrims from Assam are said to have been remaining stranded in Odisha since the coastal state are hit by the ravaging Feni. According to official information received from... 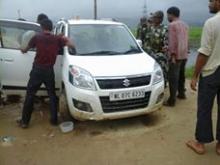 14 Aug 2014 - 6:03pm | AT News
BJP workers in Uriamghat seized a vehicle belonging to a top NSCN-IM militant in full view of a CRPF patrolling party on Thursday. The Maruti WagneR bearing No NL 07C 6233 was seized by a group of...

6 May 2014 - 6:12pm | Dibya J Borthakur
An uneasy calm seems to have been prevailing Nagaon following a clash between businessmen and a section of violent protestors on Tuesday.The incident took place at noon when a group of people took...