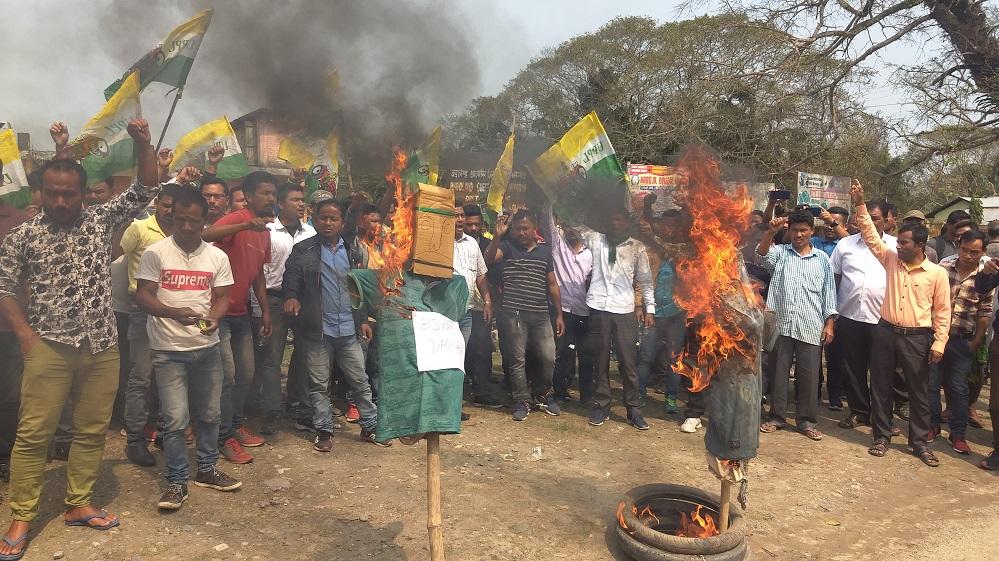 Udalguri: The pre-poll dynamics of Bharatiya Janata Party(BJP) and United People's Party Liberal(UPPL) in regard of seat sharing of the 12 Assembly seats of the four districts of the Bodo belt have not gone well with the ticket aspirants and party workers of a section of UPPL party in Udalguri district who have expressed resentment and staged protest demonstration against the BJP and burnt effigies of NEDA convenor Dr. Himanta Biswa Sarma; BJP National General Secretary and Mangaldoi Lok Sabha MP,Dilip Saikia and Rajya Sabha MP cum BJP candidate of Paneri LAC , Biswajit Daimari at Bhergaon in Udalguri district on Saturday. The party workers renting slogans against the BJP accusing them of playing 'power centric' politics have demanded that UPPL must project candidates in Paneri and Kalaigaon LAC in a friendly contest with BJP taking into consideration the grassroot suppprt of UPPL in the constituencies.

"I being an ticket aspirant of UPPL for Paneri LAC have observed  that the BJP candidates of Paneri and Kalaigaon are non-local candidates and people of the region are not going to vote them in the forthcoming Assembly polls " said UPPL leader ,Manmohan Boro . He further asserted that if UPPL party doesn't project him as an candidate he is ready to contest as an independent candidate with his supporters.

29 Mar 2014 - 9:28am | AT News
An eerie silence seems to have prevailed in Sonari a day after a local businessman died in miscreants’ attack in the heart of the town on Friday.Roads are wearing a deserted look as vehicles are...

20 Oct 2016 - 9:57pm | AT Kokrajhar Bureau
Security forces apprehended a cadre of National Santhali Liberation Army(NSLA) from Silpur area under Gossaigaon PS in Kokrajhar district today. Getting an information about presence of militant...