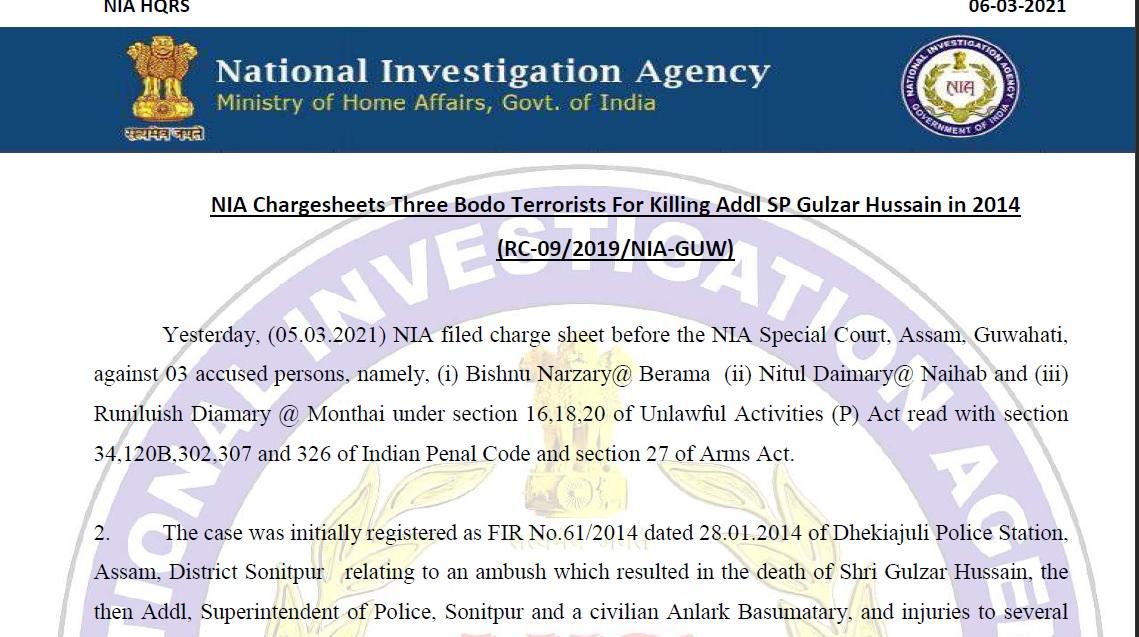 Guwahati: The National Investigation Agency (NIA) have filed chargesheet  on Friday before the NIA special court in Guwahati against three National Democratic Front of Boroland (NDFB) militants in connection with the killing of Gulzar Hussain, then additional SP, Sonitpur, on January 28, 2014 allegedly by NDFB terrorists. The three accused identified as Bishnu Narzary alias Berama,  Nitul Daimary alias Naihab and Runiluish Diamary alias Monthai were booked under section 16,18,20 of Unlawful Activities (P) Act read with section 34,120B,302,307 and 326 of Indian Penal Code and section 27 of Arms Act.

The case was initially registered as FIR No.61/2014 dated 28.01.2014 of Dhekiajuli Police Station, of Sonitpur district of Assam  relating to an ambush which resulted in the death of Gulzar Hussain, the  then Addl, Superintendent of Police, Sonitpur and a civilian Anlark Basumatary, and injuries to several  other police personnel.

The National Investigation Agency (NIA), which took over the probe in the case in August 2019, said members of the National Democratic Front of Bodoland (NDFB-S) had laid the ambush. Two of the accused named in the chargesheet – Bishnu Narzary and Nitul Daimary – have been convicted in another case, in which the former has been given a death sentence while the latter has been sentenced to life imprisonment.Two other NDFB cadres – Kham Kham Daimary and Junu Basumatary – who were involved in the case, were killed in separate encounters with security forces.