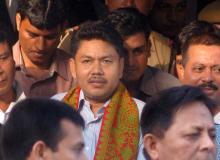 Ranjan Daimary handed over to CBI

11 Jul 2007 - 4:51am | editor
The All Assam Students Union (AASU) has withdrawn from the economic blockade of Nagaland that they had taken up jointly with the AJYCP, the All Adivasi Students Union and the Gorkha Association. AASU...