Two suspected cases of H1N1 infection have tested negative in Assam hardly 24 hours after the state confirmed its first patient of the kind. Two persons, suspected to be infected by the killer swine flu have been admitted at the isolation ward at the Jorhat Civil Hospital on Sunday. Their blood samples have been referred to the Dibrugarh based screening centre for confirmation. Reports confirmed negative. Notably, one Dhiraj Yadav, a 21 old boy from Pune is undergoing treatment at the MM Chaudhury Hospital on Saturday. Dhiraj, who is pursuing a law course in Pune came to visit his sister at Beltola in the city a few days back.

8 Sep 2017 - 1:26pm | AT News
The United Liberation Front of Asom (I) has expressed grave concern over the pathetic plight of thr power front and blamed the ruling clique for keep it in these state of affairs for years.  In... 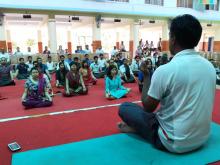 19 Feb 2008 - 9:41am | editor
Assam Chief Minister Tarun Gogoi, who also hold the finance portfolio, will table the state budget for 2008-2009 on the floor of the Assam Assembly session on March 10. According to information, the...