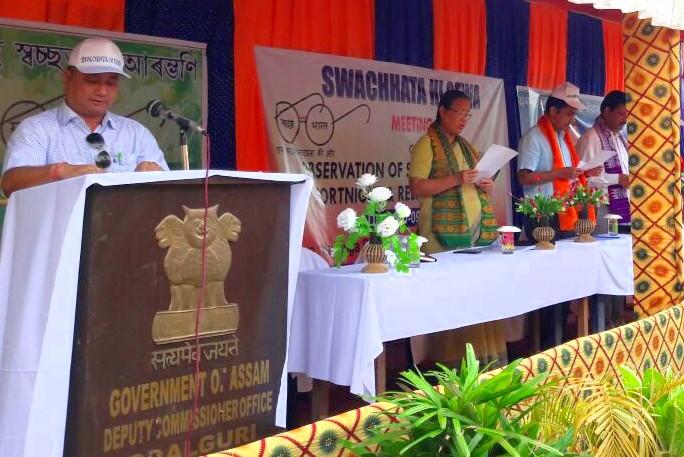 On the occasion of "Swatchata Hi Sewa" celebration,the Udalguri district administration organized various programmes in the district including ceremonial distribution of grants of aids to affected people of the district.The central programme was held at Bhupen Hazarika Mukali Mancha,Harisinga on September 20.The days programme was started with the cleanliness drive at Harisinga hospital launched by Rihon Daimari, Minister, PHE,Food & Civil Supply,Assam at 11 am followed by the grants and aids distribution ceremony at 12 am.

On the occasion he spoke on the need for involving common people in the mission.The meeting was also attended by Nitin Khade, Secretary to the government of Assam,Information and Technology Department;Maheswar Boro,MLA, Kalaigaon; Suresh Tanti,MCLA,BTC etc besides several hundred people mostly woman.The Minister ceremonially distributed rehabilitation grants to 940 storm affected families of the district.Ex-gratia grants of rupees five lakhs each were distributed to four families whose kith and kins were missing due to social disturbances in the past years.The minister also ceremoniously distributed Revolving Funds to selected SHO village organizations and Community Investment Fund of rupees 2.5 lakhs each to selected beneficiaries.A discussion was also held later at Udalguri Circuit House where Rihon Daimary said that he would take steps to promote eco-tourism in picturesque villages bordering Bhutan and Arunachal Pradeshm with introduction of "Home Stay" amenities to tourists.Deputy Commissioner and PD,Udalguri also present in the discussion with environment and wildlife activist.

10 Feb 2015 - 10:07am | Prasanta Baruah
Caught in her impending defeat, Kiran Bedi on Tuesday refused to blame it o Narendra Modi.In her twitter in the morning, the BJP’s prime ministerial candidate said that any defeat should be a...

Cry against terrorism - the Guwahati style

11 Nov 2008 - 8:30pm | editor
Undeterred by a scorching heat people thronged in thousands at the Latashil Playground on Tuesday and participated in a protest rally organized by the All Assam Students Union to take a solemn vow to...