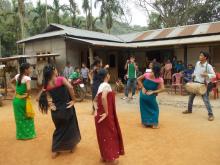 28 Mar 2014 - 9:25am | AT News
Central customs sleuths have arrested two persons and seized a huge quantity of gold from their possession in Guwahati.The duo carried gold weighing 5 kg from Kolkata to Guwahati and was arrested as...