Rail blockade called off in Chapormukh

Various local organizations on Saturday called off the rail blockade at Chapormukh scheduled at Raha demanding AAIMS in Nagaon district.
Local leaders told Assam Times that they decided to withdraw the proposed blockade in view of the assurance from the Deputy Commissioner that he would take up the issue with Chief Minister Tarun Gogoi.
Many local organizations scheduled the rail blockade in Raha on Saturday to intensify the demand. They include AASU, Bikers' Association,  KMSS. 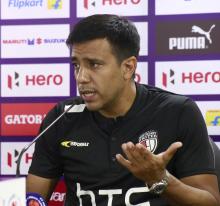 Do or die battle for NE United FC

19 Oct 2015 - 7:23pm | AT News
NorthEast United FC are preparing to take on Chennaiyin FC in the continuing clash for the Hero Indian Super League in their homeland on Tuesday. It would be the do or die battle for the home...

14 Feb 2011 - 3:45pm | Smrity Rekha Kalita
Here's some images from the Jeypore Rainforest Festival 2011 held in on the banks of the Burhidehing river at Jeypore, near Naharkatia in Dibrugarh district on February 11-13...

23 Apr 2011 - 4:01am | AT News
A combined team of Imphal West commandos and personnel of 43 Assam Rifles on Friday busted a hideout of the banned Kangleipak Communist Party (KCP) faction of Lamyanba Khuman and apprehended a...