Dr Patta Radhakrishnan (gastroenterology surgeon) from SIMS Hospital conducted the last evening OPD clinic on 22 July at Guwahati Press Club (GPC) for the benefit of its members along with their dependents. Over 30 media persons participated in the camp, which was supervised by Binay Hatikakoti from the Chennai based Hospital. The next weekly clinic at the press club premises will be conducted by the city based Dispur Hospitals on 29 July. Participants will be offered free consultations in the camp, organized under the series of ‘Evening with a Doctor’. Moreover they will also get the opportunity to check their blood sugar, pressure and weight in the camp. 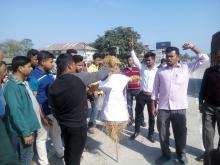 19 Dec 2017 - 2:33pm | AT News
RAHA: Raha AASU leaders and workers burnt the effigy of BJP leader and Union minister Rajen Gohain alleging his attempt to safeguard the interest of the Hindu Bangladeshi immigrants. The protestors... 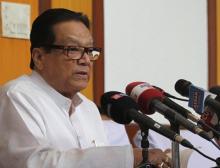 11 May 2015 - 9:22am | AT News
Dissidence within the Congress legislative body is yet to be over if one goes by the ongoing state of affairs. This time the man at the centre stage of controversy is Pranab Gogoi.Sources told Assam...