The annual cultural festival of IIT Guwahati, Alcheringa, in its 23rd incarnation has been scheduled in the fine winter season of January and February, from 31st January to 3rd February. This edition of Alcheringa is showing a promising start to grow more and more. Along with the entertainment and events, Alcheringa takes pride in showcasing it’s social responsibility by launching a range of campaigns from “Udaan” for underprivileged people to “North-East Unveiled” with the aim of spreading the culture, tradition and Beauty of North-east countrywide.

Besides the awesome Pronites line up which have seen the likes of Sonu Nigam, Mohit Chauhan, Mika, Vishal-Shekhar at this cultural festival, it conducts a plethora of events which consists of dance, drama, fashion, sports, literary, fine arts and some fine music events. The events have seen participation from colleges across all over India. The quality of teams and judges makes the event a national level competition for the participants. The events withhold prize money worth 28 lakhs to be won by the participants.

Alcheringa has started taking registrations for the various events from mid-October. As the slots of every events are fixed, so register your college or team as early as possible at www.alcheringa.in/registrations to grab a chance to showcase your talent at a national level stage and also to get submerged in the euphoria of 4 days of Alcheringa. 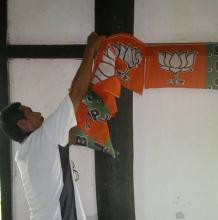 7 Jun 2017 - 1:05am | SN Sangma
In a major setback for BJP in Meghalaya seven months ahead of the assembly, the party office in North Garo Hills district refused to open after two functionaries of the party pulled out within a week...