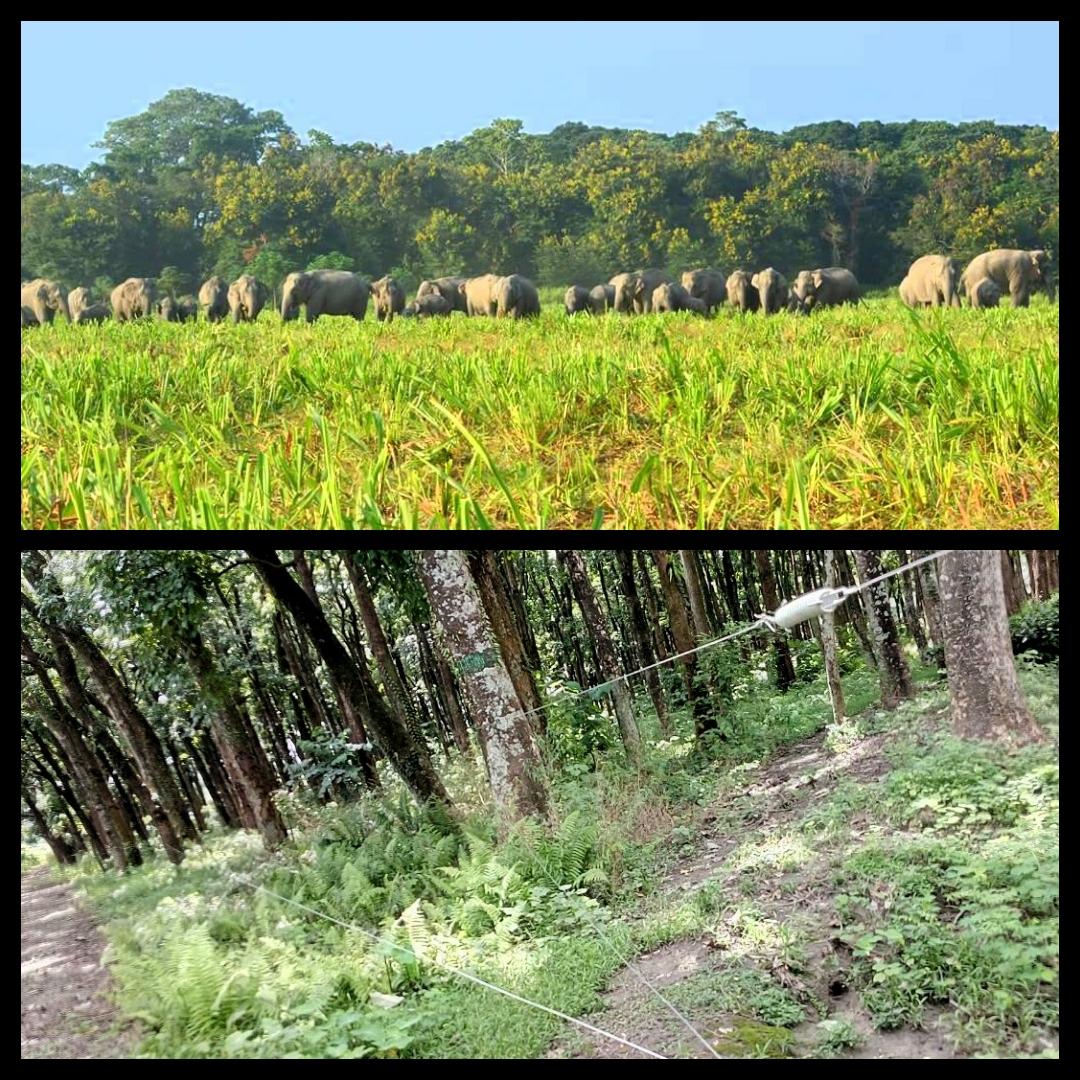 The construction of power fencing  around wild elephant habitats and corridors in and around tea gardens in Udalguri district has been decried by wildlife activists and various organizations.Recently,Paneri and Bhutiachang tea gardens under McLeod and Russel group have been erecting permanent power fencing in ther respective tea gardens preventing movements on wild elephant herds numbering more than hundred in Udalguri district raised serious concern. Herds of wild elephants have started arriving at various places of the plains of Udalguri district following age old traditional routes known as elephant corridors and shelters.Such an traditional elephant shelter is Gomari Bagan,located in between Bhutiachang and Paneri tea gardens under McLeod and Russel Ltd. near No.4 Bhutiachang village,where man and wild elephants have been living together for several decades without much conflict.The herds of wild elephants numbering more than hundred in a herd have been taking shelter in Gomari Bagan,a shaddy cool place full of Gomari trees.All the government and forest reserve lands had been encroached and forest cover destroyed by people leaving no room for wild elephants to take shelter,except tea gardens of Udalguri district.So wild elephants like tall tea garden grasslands locally known as Guatemala.They like these tall grasses as it provides them good cover for delivering babies.The "Elephants on The Line", programme launched in 2014-15 in Udalguri district to create awareness among people in order to minimize man -elephant conflict in the district.The programme was launched by a few wildlife activists of Assam namely-Mubina Akhtar,Jayanta Kumar Das,Dr.KK Sarma,Dipen Boro,Dr.Pranjal Bezbarua,Lisa Mills (USA) etc. in association with Deputy Commissioner and DFO of Udalguri district.The programme members also involved tea garden managements operating in the district namely-McLeod Russel Ltd,Goodricke Tea,Tata Tea etc in the conservation of wild elephants and also to create awareness among villagers so as to minimize causalities of both man and wild elephants.Accordingly,tea garden managements were requested to support by providing free passage,shelter,drinking water tanks or ponds and temporary habitats for wild elephants in respective gardens.They were also requested to hire at least one domestic Kunki elephant to protect houses of workers as well as the villagers.Most of the tea garden managements  namely-Nonaipara and Orangajuli of Goodricke India; Bhutiachang and Paneri under McLeod Russel Ltd;Majuli TE under Tata Amalgamated offered cooperation for the cause.The result was amazinly positive.As a result of the hard works of the members of "Elephants on The Line", death rate of wild elephants came down drastically to three only in 2017,while the numbers of death were 23 in 2014,21 in 2015,8 in 2016 and only 3 in 2017 (till now). Unfortunately,the changing situation in 2017 has now posing problems for wild elephant herds.It is noticed that Paneri tea garden has already blocked entry of wild elephants by erecting power fence. Bhutiachang tea garden too is now constructing power fence there by blocking entry of wild elephants to Gomari Bagan.Thirty percent of construction has already been completed, forcing wild elephants to roam in the nearby villages,which is likely to increase conflict between man and elephants. Wildlife activist Rajen Boro of Bhutiachang told this correspondent that Gomari Bagan must not be fenced as loosing the age old traditional shelter,wild elephant might create havoc in nearby villages.

23 Jun 2007 - 1:33pm | editor
Our Correspondent The overall flood situation in Assam improved on Saturday as the water level of the Brahmaputra, and its tributaries shows a receding trend but the brimful woes of those displaced...

5 Jun 2014 - 10:41am | AT News
Caught in a Catch-22 situation,  the 3-member AICC panel has asked Chief Minister Tarun Gogoi to resolve the dissidence within the legislative body at an earlier date. Gogoi got the instruction...