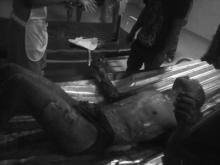 20 Sep 2011 - 2:34pm | editor
Guwahati born Senjam Raj Sekhar has been named among the 100 most influential communicators in the world, by Holmes Report, regarded as the Bible of global Public Relations industry. This is...

19 Mar 2015 - 1:15pm | AT News
The Sonaram HS School Playground in Guwahati pulls huge crowd when a huge extravaganza showcasing the way of living of the ethnic communities enters the third and last day on Thursday.Being organized...