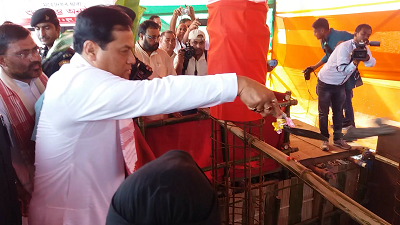 He laid the foundation stone of a gate in Dimou Chariali leading to the Bardowa Than.

Further, he laid the foundation stone of Construction work of Raha-Barapujia Road and two bridges of Raha legislative constituency .

18 Apr 2013 - 5:22pm | AT News
Noted Singer Zubeen Garg takes on ULFA saying that he would always sing against terrorism in all forms. Reacting to ULFA threat on Ya Ali performance in Latasheel Bihu function he said that it was...

Getting into University of Delhi

11 Jun 2017 - 9:27am | Siddhartha Lahon
The undergraduate programs in the colleges of University of Delhi are the most sought-after courses in the country. The online registration for the same for the academic session 2017-18 has been...