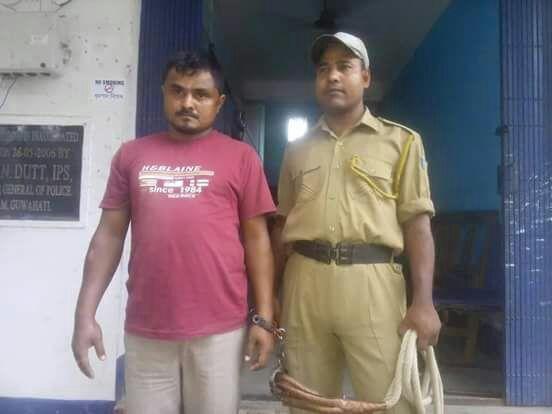 Nagaon: In an operation conducted by the Mairabari Police on Friday night, Prime accused of the Arunachal businessman, Atikur Rahman murder Case was apprehended from Mairabari.

The incident is reported from Durabandi area of Mairabari, Morigaon Distrct.

The operation was conducted by a police team led by Bhupen Kalita, Officer-in-charge of Mairabari police Station.

It may be mentioned here that Atikur Rahman, a businessman from Arunachal Pradesh had visited Mairabari for some business purpose on December 30 and had gone missing since then. Later, on January 3 hisy deadbody was recovered from a graveyard in Duranbani village.

During the initial investigation it was found that Atiur was brutally killed by one Moniruddhin and his other two accomplices included his wife and another was Sadikul Islam who had reportedly buried him in graveyard.

In connection with the Case, the police have already sent Moniruddin’s wife and Sadikul Islam Judicial custody and was in search for Moniruddin.

23 Feb 2014 - 2:50pm | AT News
The Adivasis are quite disappointed these days. They have threaten to boycott the upcoming Lok Sabha polls and even likely boycott Rahul Gandhi’s road show in Tezpur and Nagaon on Wednesday.Talking...

27 Apr 2012 - 2:15pm | Peter Alex Todd
Far from the hustle and bustle of Guwhati life and amidst ongoing big Bihu functions, a small Bihu function in Jalukpaham village, inside Garbhanga Reserve forest had swung the local tribal...