Nagaland police on Tuesday said that they would take action against the miscreants who recently unleashed terror in Jorhat district.

This was decided at a peace meeting between officials of both states and students organisations held at the estate, which is located in the Assam-Nagaland border of Jorhat district. The relief surfaced a day after ATTSA formally withdrew the blockade against Nagaland. 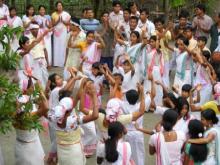 16 Sep 2018 - 4:03pm | Shajid Khan
UDALGURI: A 30-year-old man allegedly hacked his father to death at their house in Barangabari near Dimakuchi in Udalguri district on Saturday night over a trivial dispute. The family members...

1 Dec 2015 - 7:35pm | AT News
NorthEast United FC and FC Pune City are not giving up on their chances of qualifying for the semi-finals of Hero Indian Super League despite being in a discomforting  position. Both NorthEast...
Follow @Assam Times