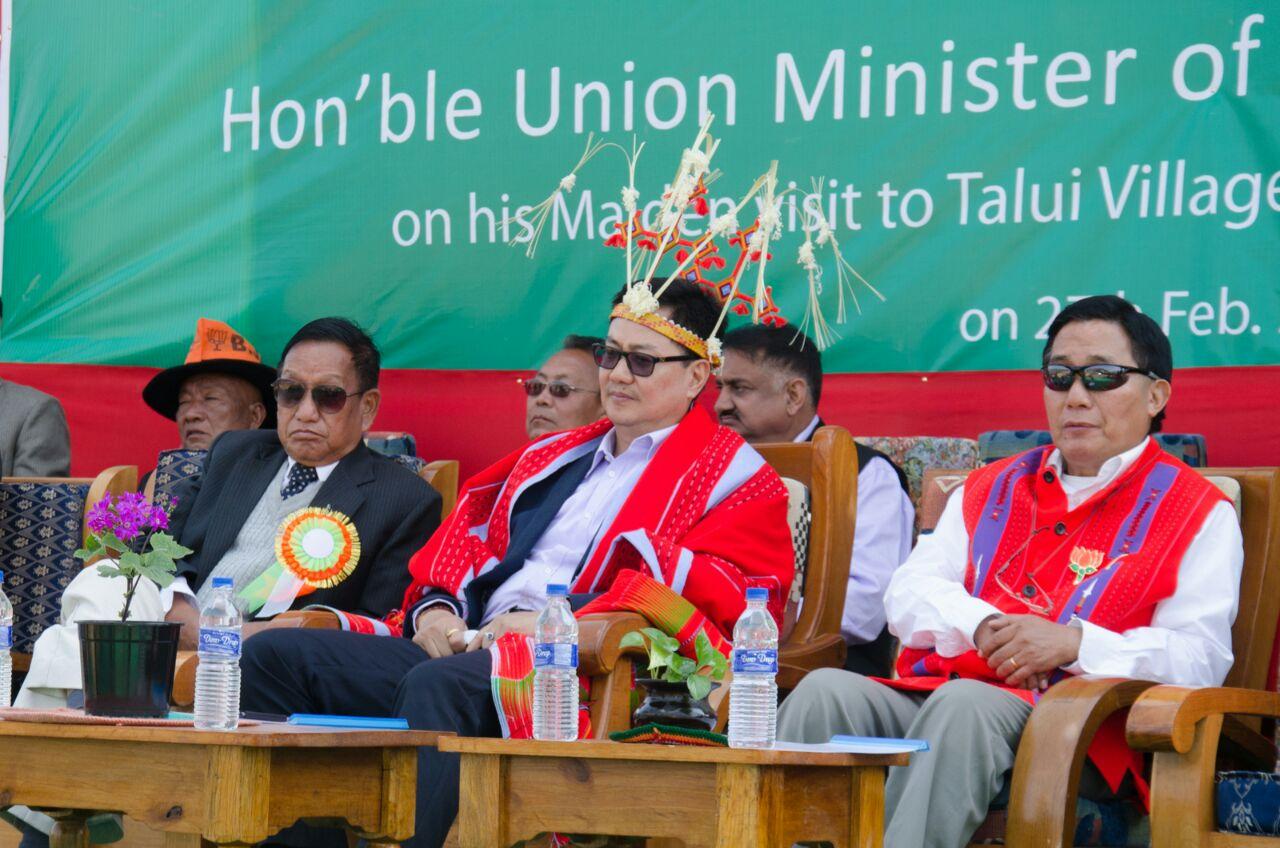 Predicting a thumping victory for the Bharatiya Janata Party (BJP) in the ensuing Manipur State Legislative Assembly elections, Union Minister of State for Home Affairs Kiren Rijiju has said that the party is all set to win the polls with a sweeping two-third majority.

"The coming election will be a watershed election in the political history of Manipur and the BJP is going to win a two-third majority to form the next government in the state," a confident Rijiju said while addressing a 2200-strong crowd during a campaign programme of 45-Chingai AC BJP candidate Sword Vashum at Talui village public ground on Monday.

Vouching victory for the party with a record margin in the Chingai constituency, he urged the gathering to vote for Vashum and not waste their valuable votes.

Now with our prime minister Narendra Modi having committed to solve the existing problems and bring about inclusive development in the Northeast region, I assure you the BJP has clearly charted a roadmap for progress, he conveyed.

Keeping in view the ensuing polls, Rijiju urged all the armed outfits operating in the region not to disrupt activities of the BJP as the same will be akin to closing the door on themselves and their future because BJP is the only party capable of resolving their issues. If they(armed outfits) would ever attempt to strike the BJP, where else will they turn to for their justice,? " he noted with caution.

He also came down on the Congress for harbouring anti Christian sentiments and said that Congress has an infamous history of its former prime minister Indira Gandhi forbidding St Mother Teresa from visiting Arunachal Pradesh to preach the Gospel.

Back in Manipur, the Ibobi led Congress government in Manipur is instigating economic blockade by creating seven new districts only to gain political advantage while inciting communal hatred among the different ethnic groups in the state.

Describing his first visit to Talui, the birthplace of candidate Sword Vashum, as a beautiful experience, Rijiju poured out his sentiments of being connected with the Tangkhul brethren.

In his speech, Hakeqat Jamal stressed on the need to oust Manipur Congress government, which he termed is depriving all basic amenities to the public.
Former minister Dr. Khashim said that the villagers are fortune to have centre leader Rijiju amidst them, adding it's an opportunity for villagers to highlight their problems. Vehemently reiterating that BJP is not anti Naga, but for their development, he said BJP govt on the contrary, is doing its best to free Nagas from political bondage.

13 Sep 2019 - 7:16am | AT Kokrajhar Bureau
An awareness programme on child marriage, child rights and protection was organised by Kokrajhar Child Welfare Committee (CWC)  in association with All BTAD Gaonbura Association, here at...

25 Dec 2012 - 9:08pm | Nava Thakuria
The GNRC Hospitals in association with Guwahati Press Club has organized a free medical check-up camp for the media persons with their families on December 29 next. The camp, to be held in GNRC...

9 Jan 2015 - 11:45pm | AT News
Dissident Congress leader Dr Himanta Biswa Sarma met chief minister Tarun Gogoi at Koinadhara on Saturday amid speculations his comeback to the soon to be reshuffled cabinet.Dr Sarma, who put in...