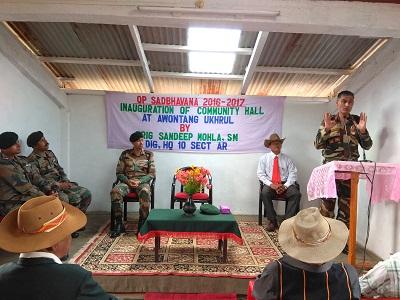 Speaking as chief guest at the hall inauguration function, DIG, Brigadier Sandeep Mohla stressed on the need for the Ex service men association to strengthen for the welfare of its growing members, while at the same time, urging their wives association to also follow suit.

He also said that he would undertake to further improve the new community hall and added that ceiling, flooring and other needs of the building will be provided from his capacity.

The hall has been constructed under the aegis of 27 AR,  HQ 10 sec AR under 'Operation Sadbhavana' Project at the cost of Rs. 4.5 lakh.

On behalf of ESMA, Chairman Hormi expressed gratitude to the  27 Assam Rifles HQ 10 Sec AR for their support in providing the needs of the association.

27 Sep 2007 - 3:29am | Anonymous
Guwahati : The 31st National Highway witnessed a loud roar today when the thousands of students march through it to the District headquarter of the Baksa shouting the lawlessness of the state...

21 Feb 2008 - 3:10am | editor
Today is Bir Chilarai Day which is being observed across the state with a number of programmes. Assam Chief Minister Tarun Gogoi is schedule to attend a public meeting being organized to mark the...