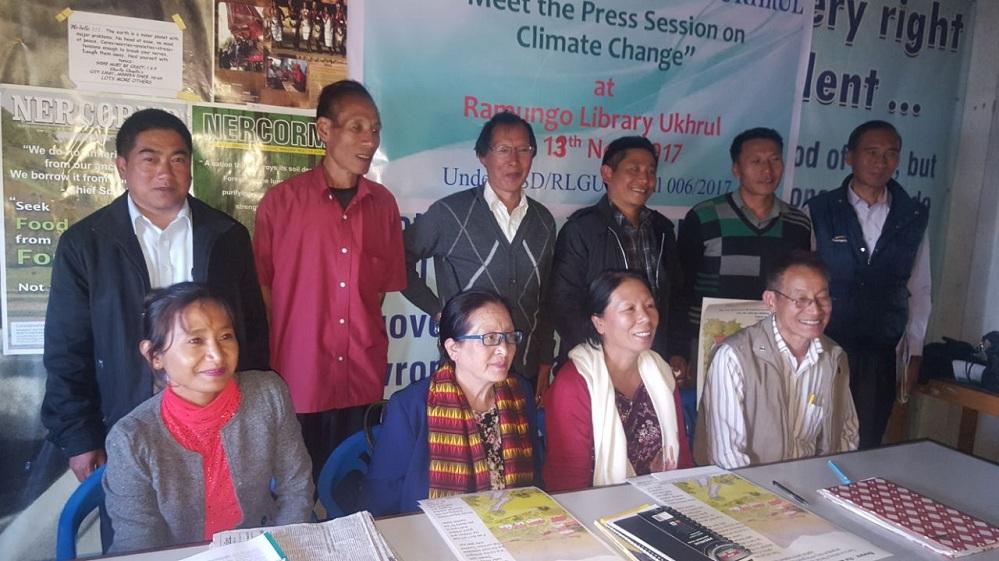 Public leaders and social activists alike of Ukhrul district in Manipur, have vehemently decried the state government's silence over non-implementation of Manipur State Action Plan on Climate Change (MSAPCC) and further urged the authorities concerned to expedite measures to implement the action plan in the state without further delay.


"We are already facing the adverse impact of climate change in our everyday life in varied ways, but our government is still sitting lethargic without making any visible efforts to implement the action plan to combat the climate change, " the leaders of the district from different social spectrum, said during a press conference held at Ramungo Library Group office, Phungreitang on Monday.


Social activist Hungyohung said that MSAPCC was duly approved by the state assembly back in 2013, but it was learnt that the action plan could not be implemented in the state due to certain technical defects. "Subsequently, an order calling for review of the action plan was issued to sort out the defects. But till date, it has not been taken up for no obvious reasons," he rued.


According to Hungyohung, mitigation and adaptation are two crucial components of the said action plan, which are aimed at abating the impact of climate change which is an inevitable global phenomenon.


"While the public should also share the responsibility of containing the phenomenon in their own capacities, the government should evolve a strategy to address the challenges of climate change so as to alleviate the associated risks," he observed.


Asserting that MSAPCC is the right approach to the climate challenges, Hungyohung questioned as to why the government is shirking it's duties. "We have seen a change of guard, but we are yet to see any changes in the battle against climate change here."


Dr. Ngahorshai Luithui, retired Veterinary officer, opined that lack of precautionary measures is responsible for the natural calamities that occurred across the district this year, including the massive landslides at Yangui Kong at Shirui area, that left varied agricultural crops damaged.


"Owing to increase in natural calamities here, villagers are now growing apprehensive of working out in the fields to continue their livelihood activities," said Pamthar a social activist, citing the recent incident where land masses from landslips buried four members of a family alive at a field in Mapum village.


"Unless preventive measures like the action plan are taken up immediately, there will be costly consequences in the future, " he cautioned.


Questioning the motive of CM Biren's 'Go to Hills' slogan, he rued that had the slogan held any substance in it, the government would have done something towards the calamity crisis in the district (where landslides occurred at unlikely places), by way of preventive measures or compensations for the victims of natural calamities.


"It was not just Sirarakhong village that faced unprecedented landslides where many ministers visited and extended assistance to victims, " he pointed out, adding that unfortunately in the case of many other villages that a faced similar fate, the government has remained silent as if nothing had happened elsewhere.


Sharing the same sentiments, Ringthem Kasak another social activist, opined that when the hill populace is struggling with deplorable road conditions everywhere compared to the valley areas where even lanes leading to each locality is carpeted and the government is indifferent, what is there to be called equality.


Zenith Hungyo, an educationist, observed that eco- system and biodiversity of the district are fast changing, affecting the natural resources thereby impacting the livelihood of community.


Apart from the climate change affecting the residents physically causing various health problems, even the quality of home grown vegetables like cabbage, peas etc is degrading, she noted, stating that unlike in the past, the vegetables now taste coarse, and the same is true of flowers in our gardens, Zenith Hungyo said.


Regarding the frequent natural disasters in the district, she vented her angst that victims of such calamities in the hill districts are often deprived of adequate compensation and urged the government to look into the matter.


Similarly, the government is turning a blind eye to the hardships faced by the villagers due to non existence of road connectivity in different corners of the district, Zenith lamented, contending that many sick people, including pregnant women have lost their precious lives due to delayed treatment in the absence of motorable roadways.


Ngatangmi yet another social activist felt that when the government can't even repair Ukhrul town road, it is hard to imagine the same infrastructures for the villages.


He also said that preventive steps need to be initiated for preservation of water sources of district which are depleting already.


A bureaucrat Wonthing urged the government to revive the erstwhile programme of the government 'Eco Club' which used to be operated in most government schools so as to enlighten the students about the importance of environment.

27 Sep 2014 - 2:33pm | AT News
Union home minister Rajnath Singh would be on a stock taking to the flood hit areas of Goalpara and Kamrup district along with South Garo hills in Meghalaya on October 1.The flood waters in these two...

11 Mar 2014 - 2:11pm | AT News
Gauhati High Court on Tuesday deferred hearing of Akhil Gogoi’s bail plea to March 14.The court deferred the hearing on Tuesday after the KMSS president’s lawyer sought more time to represent him in...