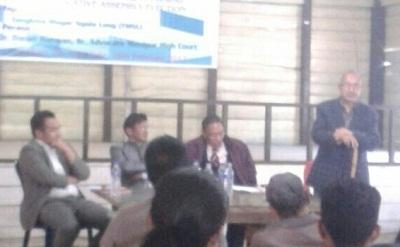 In the poll-bound Ukhrul district, a northern district of Manipur, India, there appears to be hitherto little or no youth activism in the political and democratic process. After all, Ukhrul is one place where politics is traditionally considered a game only played by the middle aged and elders alike.

This time around, it has, on the contrary, dawned on many intellectuals of the district that unless the youth are encouraged to take part and play active roles in the democratic process, which is considered a vehicle for change, the future looks bleak for the community.

In line with the realization, the Tangkhul Mayar Ngala Long (TMNL-Tangkhul Youth Council) organized a one day  seminar on "The Roles & Responsibilities of Youth in the Upcoming 11th MLA Election 2017" at TNL Hall on Thursday. Ukhrul district is going to polls in the second phase of Manipur State Legislative Assembly Election on March 8 next.

"It is a sad situation we are living in where our youth has little awareness about their vital roles in political and democratic process and much less about what their future holds," said Senior Advocate Daniel Ramsan who spoke as resource person at the seminar.

Cautioning the dozens of youth who comprised the main audience, that their future is at stake on all fronts politically, socially or whatever, Ramsan made no bones of the fact that the future for the posterity has been compromised by the successive representatives of the district on the altar of their personal gains and aggrandizement.

What will our future be like when large chunks of ancestral lands are arbitrarily declared as Catchment Area by the State government before the very eyes of our so-called people's representatives, Ramsan questioned.

"The irony is our representatives do not attend to HAC which is a special assembly for tribals, but they ignored it and put themselves at the mercy of the state assembly instead," he pointed out.

He, however, stated that all hope for future is not lost as yet as we still have the Constitutional provision of Article 371 C and went on to add that the same is 'heart and soul' for the tribals in the State.

Stating that Article 371C is an all empowering provision, he called upon the youth of the community to seize the opportunity of the upcoming polls for revival of the provision. "Do not consider elections as voting exercise but rather as a means for change," he stressed.

Sharing his views on the seminar former TNL president Stephen Angkang observed that through this initiative by TMNL a step forward has been taken toward encouraging the youth to participate in the electoral politics for positive change in the society.

"It's for youth to do their mite in their prime time to leave a good legacy for the upcoming future generation," Angkang felt and asked what better time is there for the youngsters than this election time to start working for the goal.

"Our contemporary society is replete with failure, and it is about time we find out where we have gone wrong," he exerted, while urging the youth not to emulate alien culture but hold on to the values of forefather's culture.

TNL president Weapon said that it's not too late to do good things and called on youngsters to uphold the political ideology based on clear conscience, keeping in view the Framework Agreement signed between the Government of India (GoI) and NSCN-IM for age-old Naga political settlement.

"We now have realized the damage caused by non functioning of HAC, and non implementation of Article 371C, so there be no doubt about our determination," Zimik and reposed faith in the youth to prevail upon the candidates to vouch for implementation of the Constitutional provision in the coming polls.

Moderated by social activist AC Raising, the one day seminar drew an audience mostly of students and college goers from across the district.