As this time SEBA (Board of Secondary Education of Assam) has made it mandatory for all examination centers conducting HSLC examination to have CCTV camera installed in their premises, Raha H.S .School  has also installed 4 CCTV cameras inside the school premises. Similarly, tight security arrangements are also being made for the smooth conduct of the examination by the competent authority.

Apart from the Raha H.S.School centre, another centre at Chaparmukh B.B. Hansaria H.S.School  also conducted the H.S.L.C exam on Friday. . A total 317 candidates appeared from this centre. No disturbance has been reported from these two centres.

15 Feb 2008 - 5:35am | editor
A high level Central team is reviewing Assam’s law and order situation. According to information, led by Union cabinet secretary K M Chandrasekhar the 24 member team is reviewing the... 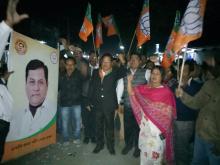