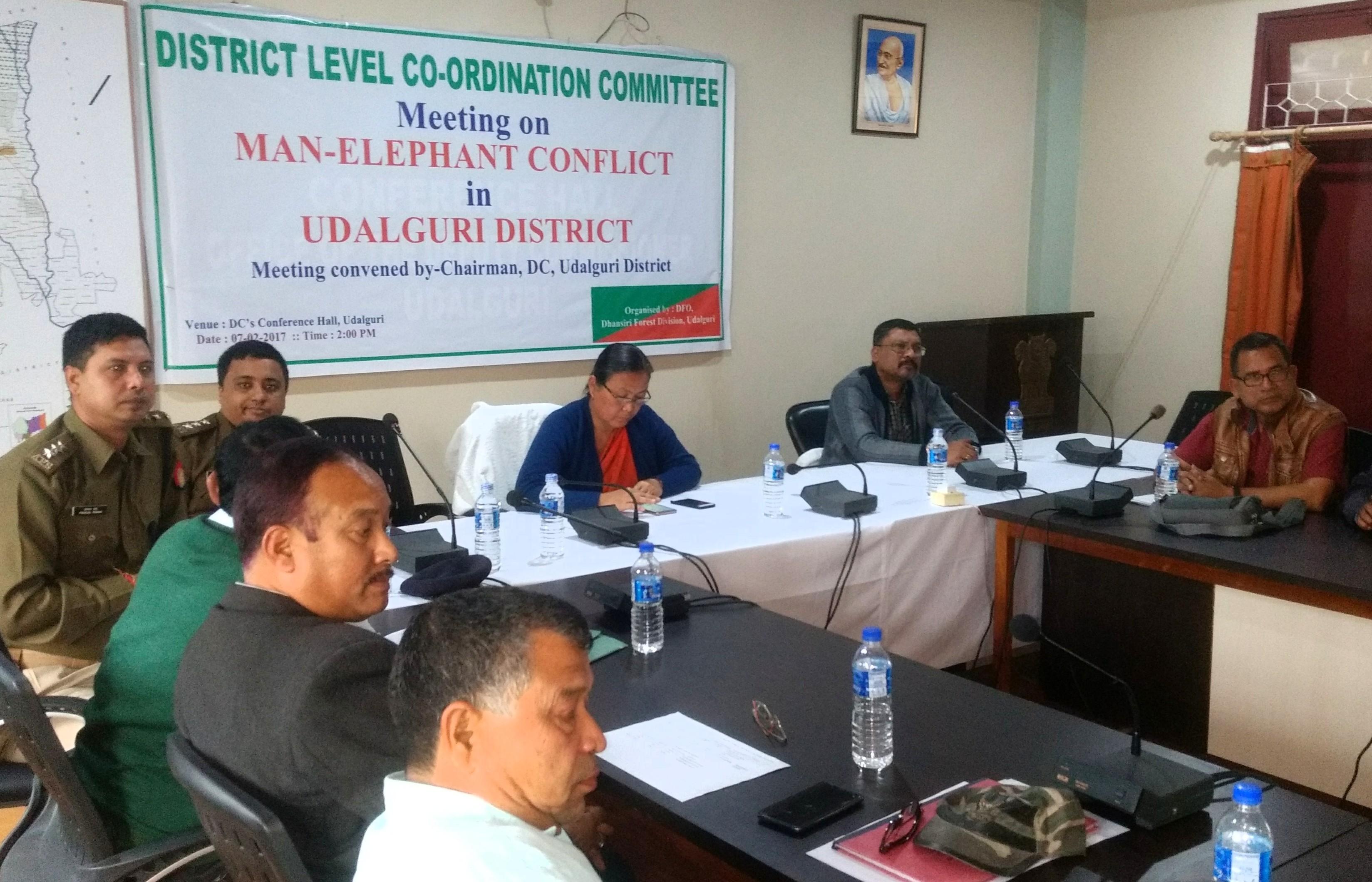 Man-elephant conflict has been a burning issue in Assam during recent years.The only reason was massive destruction of forests and encroachment on all National Parks,Wildlife Sanctuaries, Reserve Forests, Proposed Reserve Forests,grazing fields and riverine lands.In northern areas of Udalguri district bordering Bhutan and Arunachal Pradesh this man made conflict has been creating havoc during past five years ie from 2012 to 2016 with deaths of 85 human beings and 35 wild elephants beside damage of several hundred houses and crops.At the same time the district has witnessed massive encroachment on forest lands during the periods.As per official records out of 24,995 Hectors of lands belonging to wildlife sanctuary,reserve forests,proposed reserved forests (PRF),8762 Hectors have already been under encroachments.(1365 H in Khalingduar RF;2343 H in Rowta RF,155 H in Bhairabkunda RF,400 H in Bornadi WLS;920 H in Kundarbil PRF;3520 H in Bhairabkunda PRF;60 H in Newly PRF). No step to evict the encroachment had ever been taken by Assam government or BTC administration.Rather another 1000 Hector of lands belonging to Newly PRF have now been under process to be handed over to Ramdeb owned Patanjali group for establishment of a mega herbal park.Recently Assam government directed Dhansiri Forest Division,Udalguri to suggest measures well in advance for mitigation of Man-elephant conflict in the district.A 35 member district level committee has also been formed in advance with Deputy Commissioner,Udalguri as chairman;DFO,Udalguri as member secretary;Superintendent of Police,wildlife activists,all Range Officers,concerned VCDC presidents and gaonburahs etc as members.The first meeting of the committee was held recently at the conference hall of the Deputy Commissioner, Udalguri on February 7 which was presided over by Sadhana Hojai DC,Udalguri.The meeting was attended by MK Sarma,DFO,Dhansiri Forest Division,Udalguri;Anupam Choudhury, ADC,Udalguri; Bhaskar Jyoti Manta,ADC,Udalguri;Pranjal Bora,SDPO,Bhergaon;Debarshi Choudhury,DSP,Udalguri;Dibakar Das,ACF, Udalguri,wildlife activist  and senior journalist Jayanta Kumar Das etc.After detail discussion,the meeting adopted a few resolution suggesting Assam government and BTC authority regarding solution of the issue.Important suggestions were-1. Government to direct tea gargen managements of McLeod Russel India,Goodricke,Amalgamated TE (Tata) to sponsor at least one Kunki elephant each at the disposal of forest department during pick seasons of the conflict ie from July to December each year.The tea companies also be directed to maintain a plot of minimum 10 hectors of land with drinking water provision so that migratory herds of wild elephant herds could take shelter. 2.Government to recognise members of EOL (Elephants on the Line) who had been given training on wild elephant behaviour,GIS,GPS,wildlife photography and safety measures to be taken during chasing of wild elephants of six sectors of the district as volunteers supporting forest department keeping in view of the shortage of man power in the department. 3.Government immediately to identify vacant plots of lands adjoining to RF,PRF,WLS,revenue lands for creation of new grasslands with bamboo and banana plantation and more JFMC forests in order to provide shelter to wild elephants and to check further encroachment. 4.Anti depredation squads be formed in vulnerable villages frequently effected by the conflict comprising ten to twelve young youths of the villages under the leadership of the trained leaders to be headed by a forest officials. 5. Honorarium to members of the squads be sanctioned at least for six months in a year ie from July to December. 6.Funds also be made available for uniform,boots,jackets, torch lights,refreshments and transportation of the members. 7.The persons engaged in anti depredation squads must be covered by insurance to meet any kinds of accidents leading to death or injury. 8.A corpus fund with sufficient fund to be created to meet with immediate relief in case of deaths caused by wild elephants.The minimum  immediate relief towards deaths as provided earlier may be raised from Rs.5000/- to Rs.20,000/-.

3 Feb 2014 - 12:02pm | AT News
The death toll in the Chauldhua attack gas gone up to 12 with the recovery of one more body in Hatipota area.The decomposed body was recovered by the local villagers on Monday morning. It has yet to...