A new dawn - the paris agreement enters into force! 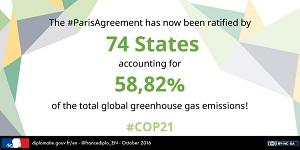 Today represents a new dawn in the history of mankind. Future generations will remember 4th November 2016 as the day the Paris Agreement came into force. The threat of climate change has never been more urgent, but the way forward has never been clearer with the historic climate agreement being among the fastest international agreements ever to be ratified and come into force. Expectedly, all the dates associated with the Paris Agreement will be remembered for eternity as the decisive moments when the global community decided to bring back the planet from the brink.
The path was paved exactly a month back when the European Union overcame procedural hurdles to join the agreement and ensured that the conditions for implementation were met, less than a year after the Paris Agreement was signed on the 12th of December, 2015. At least 55 countries, representing at least 55 percent of global greenhouse gas emissions had to ratify the agreement for it to take force. With the EU member states, 73 parties to the Paris Agreement have now ratified or formally approved the agreement, representing almost 57 percent of global greenhouse emissions.
It took 24 years after the Rio Earth Summit in 1992, which created the United Nations Framework Convention on Climate Change (UNFCCC), to finally achieve a truly global agreement to address the climate change crisis. But the next UNFCCC meeting in Marrakesh, Morocco, is scheduled days after the Paris Agreement comes into force, from the 7th of November through to the 18th. It is also significant that the first session of the “Conference of the Parties serving as the meeting of the Parties to the Paris Agreement”, commonly referred to as the CMA1, where countries start practical negotiations about implementation.

That is because, when an agreement comes into force, the compulsory elements are binding on the parties who have joined and the party is under moral obligation to implement the voluntary clauses as well. These countries now must initiate action to achieve their climate plans, called nationally determined contributions (NDC) and submit a fresh NDC every five years to ensure that the planet stays on track to control global warming.

On April 22, 2016, world leaders from 175 countries inked the historic Paris Agreement, using Earth Day 2016 as a backdrop for the ceremonial inking of the global agreement that will, hopefully, lead the world away from the age of fossil fuels and save the planet from catastrophic climate change. Several heads of state, officials and civil society representatives were at the United Nations headquarters at New York City to sign the Paris Agreement.

"We are in a race against time." U.N. Secretary-General Ban Ki-moon had told the gathering at the United Nations headquarters in New York. "The era of consumption without consequences is over." The U.S. Secretary of State John Kerry signed the document while holding his young granddaughter. She was one of 197 children at the event to represent the parties that adopted the agreement, Ban said. "These young people are our future. Our covenant is with them," Ban said. "Today is a day for our children and grandchildren and all generations to come."

US President Barack Obama has said that the Paris Agreement represents “the single-best chance that we have” to protect the planet from climate change. Its promise lies in the fact that it establishes a durable framework of global action in which all countries, both developed and developing, make improved climate commitments over five-year cycles.

India has been leading the world in taking decisive action in recent times; in mid-October, it enabled nearly 200 countries to seal a legally binding deal that aims to reduce climate damaging greenhouses gases in products ranging from air-conditioners and refrigerators to shaving foams, a pact which will come into effect from January 2019 for developed countries such as the United States but much later for developing economies. The deal approved in Rwandan capital city Kigali, aims to substantially reduce the use of hydrofluorocarbons (HFCs), known as super greenhouse gases, by the middle of this century and complement the Paris Agreement on climate change.

The Paris Agreement is an important success for climate diplomacy as instead of imposing targets, it is based on voluntary country commitments or the Intended Nationally Determined Contributions. It commits rich and poor countries to take action to curb the rise in global temperatures that is melting glaciers, raising sea levels and shifting rainfall patterns. The Agreement ‘recognizes that climate change represents an urgent and potentially irreversible threat’ to the planet and mankind, and has set the goal for the world’s atmosphere to be a net zero of pre-industrial levels by 2100. By establishing a process where countries will meet every five years to review their progress in cutting emissions, the Paris agreement creates a way to ensure everyone’s living up to their promises. All countries are to review these contributions every five years from 2020 and to aim to achieve carbon neutrality in the second half of the century. Just as important, this window creates an opportunity for civil society groups and citizens to keep the pressure on governments to increase their commitments to cutting emissions – also submitted every five years.

15 Dec 2014 - 9:10pm | SK Hasan
The brutality of policemen once again hits media headlines. The victim this time is a woman Congress activist in Nazira. Identified as Arju Begum, she was mercilessly beaten up a police man of the...