For quite sometime, those who back Hopingson A Shimray and the NPF ticket aspirant himself have been claiming that the number of his supporters in the Phungyar assembly constituency has continued to grow over the last few months. As reported earlier, till the middle of October, a whooping 2200 supporters from the constituency have newly enrolled themselves as primary members in the Naga People's Front (NPF) to support Shimray in the ensuing Manipur legislative assembly elections.

And while Shimray arduously propels the 'new-vision-for-the-people' mantra, it seems to make sense to assume that 'grassroots campaigning' to genuinely feel the pulses and concerns of the electorates has been paramount to the current growth of his support.

The former Indian Railways officer, who hails from Marou village under 43-Phungyar constituency in Ukhrul, has repeatedly stated that he has been able to understand the needs of the villagers and enlighten them on the need for securing their lives on political, economic and social fronts.

"About 100 people including 85 youth from 24 villages under Kamjong subdivision drawn from different political affiliations participated in the interaction and pledged their support for Hopingson Shimray through a consensual resolution," event convenor Ningkhan Zimik told reporters during a news conference held at UDWJA office on Saturday.

According to Zimik, out of around 100 participants who received enrollment forms, 42 were confirmed as primary members of NPF on that day itself, while the rest are expected to submit the documents in a few day's time.

The participants have fully subscribed to the ideas and vision of Hopingson Shimray for the development of Phungyar constituency and other hill districts of Manipur, Zimik said quoting the resolution adopted in the meet.

He also said that the people have now realized the relevancy of NPF to the politics of Naga people in view of the ongoing peace process.

Continuing that NPF is also the only party that is pursuing effective implementation of the Article 371(C) for the tribals of Manipur, Zimik said as citizens of Manipur, they believe in the principles of mutual respect among the different communities in the interest of peace and unity.

To support Hopingson Shimray, each of us has taken the first step by enrolling ourselves as primary members of NPF, said a supporter Khangampam Eshidang.

"So, we are committed to work for the success of Hopingson Shimray in the forthcoming elections under any circumstances," said Eshidang.

Meanwhile, vice president 43- Phungyar area NPF unit B Chithung has, on behalf of the party, expressed pleasure in the enrollment of 42 new members in the party and extended wishes to Hopingson Shimray for success in the ensuing polls. 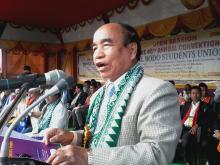 29 Mar 2012 - 8:59pm | editor
Three city based journalists have been selected for the next GNRC Media Fellowship programme, who are expected to start their activities from early next month. Selected fellows namely Nituparna... 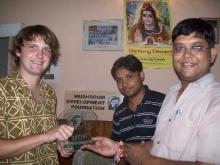