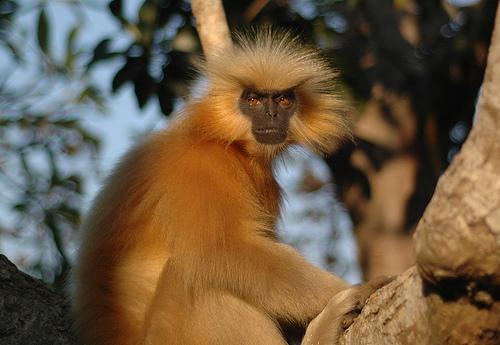 The Golden langur (Trachypithecus geei) has now been listed in the World’s 25 Most Endangered Primates! It has been placed in this list due to extensive habitat fragmentation, habitat destruction and encroachment along its distribution range which has led to rapid population decline.

This was declared in a sessionunder chairmanship of Dr. Russell A. Mittermeier (Chair,International Union for Conservation of Natures Species Survival Commission Primate specialist Group (IUCN,SSC, PSG) in the joint congress of International Primatological Society and American Society of Primatologist which was held at Chicago, USA from 21st to 27th August 2016. Dr. Dilip Chetry, Head of Primate Research and Conservation Division of Aaranyak, Assam attended this conference which included 1500 participants from 56 countries.

Dr. Dilip Chetry also presented a talk on the Golden langur and Hoolock gibbon in Chicago. He told this correspondent that this is a positive development as the Golden langur will now draw the attention of global primatologists. For Assam, it is in the hands of the Government to act quickly and constructively to ensure a safe future for the golden langur. To give a new dimension to the conservation of the golden langur in particular and other wildlife in general, the Govt. should declare the “Ripu-Chirang Wildlife Sanctuary” with 590sq.km in the Manas Tiger Reserve and Kakoijana Wildlife Sanctuary (17sq.km) near Bogaigaon immediately, and also bring other areas under the protected areas network. The future of Golden langur is in the hands of mankind and the focus must be on education and awareness, habitat conservation, connecting the different forest fragments by forest corridors, habitat restorations, community participation and Trans-boundary conservation issues with Bhutan. Above all, both political will and public support are needed to achieve the goal of conservation. Dr. Chetry added that, “We are extremely hopeful that the people living near golden langur habitats will co-operate whole heartedly with the Forest Department, researchers, scientists and NGOs for the long-term conservation of golden langur which is the charismatic species of Bodoland Territorial Council. It can also be used as a “Flagship species” for the conservation of bio-biodiversity of this region.”

The Golden langur (Trachypithecus geei) is an endangered primate, endemic to the semi-evergreen and mixed-deciduous forests of Indo-Bhutan border. It has already been listed as endangered species in the IUCN Red List (2016) and Schedule-I species in Indian Wildlife Protection Act (1972). In India its distribution is confined between the rivers Manas in the east, Sankosh in the west, Brahmaputra in the south and extends to an area over 2500sq.km2. However at present approximately just 1400sq.km is remaining. In Bhutan its distribution is equally restricted and found in central Butan ranging between Sankosh River and the Chamkhar-Mange-Manas river complex.

5 Aug 2011 - 10:46pm | editor
The United Liberation Front of Asom demands more autonomy and constitutional safeguard for the indigenous people in Assam. In its 12-point of charter of demands submitted before Union home...

4 Jan 2018 - 7:35am | AT News
GUWAHATI: The special operation unit of Dibrugarh police set up to probe the APSC scam is filing its next charge sheet on Thursday. Led by senior police officer SS Panesar, the police team is well...