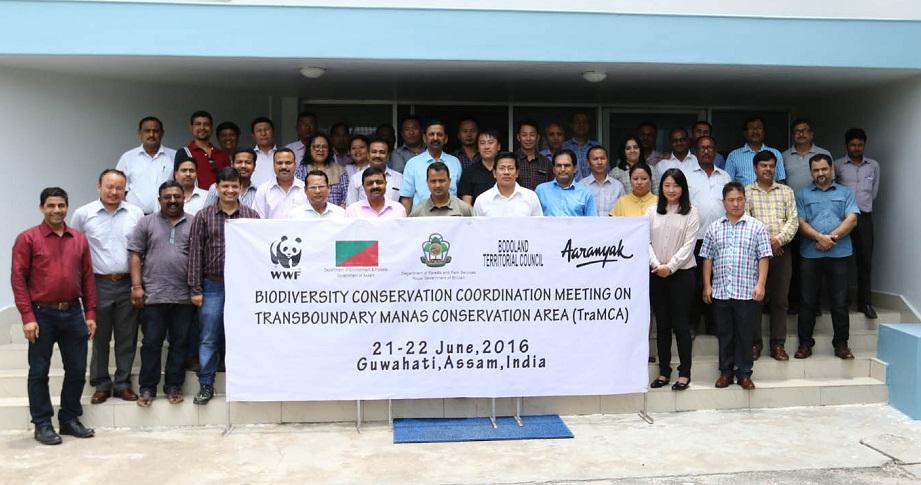 For the 10th time since 2008,important delegatesrepresentingthe Governments of Bhutan and Indiaalong with conservation NGOs of the region  met in Guwahati, Assam.The landmark meeting was held on 21st-22nd June 2016 to discuss Conservation of Biodiversity- Issues and Opportunities in the large Transboundary Landscape between India and Bhutan across the International Boundary from the river Sankoshinthe west to the River Dhansiri in the east, referred to as the TransboundaryManas Conservation Area (TraMCA). In India, it includes the Manas Tiger Reserveandin Bhutan,  the forested areas of south  covering the Royal Manas National Park, Phipsoo Wildlife Sanctuary and Jomotshangkha Wildlife Sanctuary. The Ecosystem Services provided by TraMCAsupports a total human population of over 10 million overIndia and Bhutan.

This meeting hadthe delegates taking stock of the status of implementation of the work plan developed for the region and also discussing aboutthe emerging issues specially with reference toproposed developmental activitieshaving potential negative impact and continued anthropogenic pressure on the forest resources. The delegates expressed their concerns on ongoing deforestation activities in the TraMCAlandscape and expressed the need for scaled up governmentefforts to arrest deforestation on an urgent basis. Restoration of the denudated forest areas and their protection was also discussed as the only possibility of regaining lost habitats. It is worth mentioning here that Manas Tiger Reserve has already lost about 40% of its forest cover to encroachments and development activities, since it was declared a Tiger Reserve in 1973. Mr. D.P. Bankhwal, IG Forest, National Tiger Conservation Authority (NTCA), Guwahati says, “Ecosystems are like Humpty Dumpty. If the balance is lost, it is lost forever. No amount of riches or power can bring it back.”

The meeting was also addressed by Mr. D. Mathur,PCCF & HOFF, Assam, who appreciated the effort of the Indian and Bhutanese  in bringing the group together which is now well recognized internationally. He has also assured all support to see its progress further. A Swargowari, CHD, Forest Department of Bodoland Territorial Council expressed that the TraMCAconcept that gained momentum during the last six years is moving in right direction due to the effort of all the stakeholders.
The delegation from Bhutan, lead by TenzinWangchuk, Park Manager, Royal Manas National Park has expressed concerns with current and proposed developments in the landscape and emphasised on further strengthening the collaboration of the TraMCApartners to achieve its long term goals.

In the meeting, a report on joint monitoring of tigers was also released by Mr Mathur. The report presents the finding of joint monitoring of tigers in both Manas National Park, India and Royal Manas National Park, Bhutan. The study identified 21 individual tigers in the study area that covered approx. 600 sq km of India and Bhutan Manas in TraMCA. The study also found four individual tigers that are common to Bhutan and India Manas, indicating that the connectivity is crucial in the TraMCAregion to protect tiger as well as other biodiversity of the area. A previous study in the TraMCA in 2011-12 reported 14 individual tigers. The study was carried out during February-May 2015 simultaneously in India and Bhutan across the boundary by Forest officials and researchers from Aaranyak and WWF.

No facet of conservation in TraMCAwas left behind in this discussion which included delegates from agencies ranging from tourism, wildlife conservationists and biologists to government agencies. The following are a few salient discussion points of the meeting.

Tiger Conservation as an umbrella for accentuating the overall conservation status of the area was discussed. Besides discussing Tiger Protection, extensive discussions about Elephant conservation, Leopard and Ungulate species Monitoring, restoration of habitats, Control of invasive species. Besides, the idea of jointly monitoring Elephants by Radio Collaring was seen to gain great support from delegates of both India and Bhutan.
A variety of issues ranging from habitat loss, unregulated tourism, water unavailability, wildlife causalities, etc. were discussed in the meeting. However, a recent proposal by the Indian Government to have a highway constructed along the Indo-Bhutan International Border was discussed in most detail. The grave implications that such a linear structure may have on the fragile ecological balance of the area were discussed. Such developmental activities would bifurcate the contiguous habitats and adversely affect wildlife, which in turn will bring in severe ecological affects including water availability and agriculture regimes of the TraMCA region.

30 Jun 2008 - 7:07pm | bobbyramakant
NAPM demands immediate closure of the Counter-Insurgency and Jungle Warfare School at Vairengte in Mizoram Amidst protests against price rises of essential items throughout the country, the Prime...

18 Nov 2007 - 9:48am | editor
he north eastern students vow to stop illegal infiltration from across the border in the region.They will care not even an iota to go to any extent to check it.This is more or less of what the...