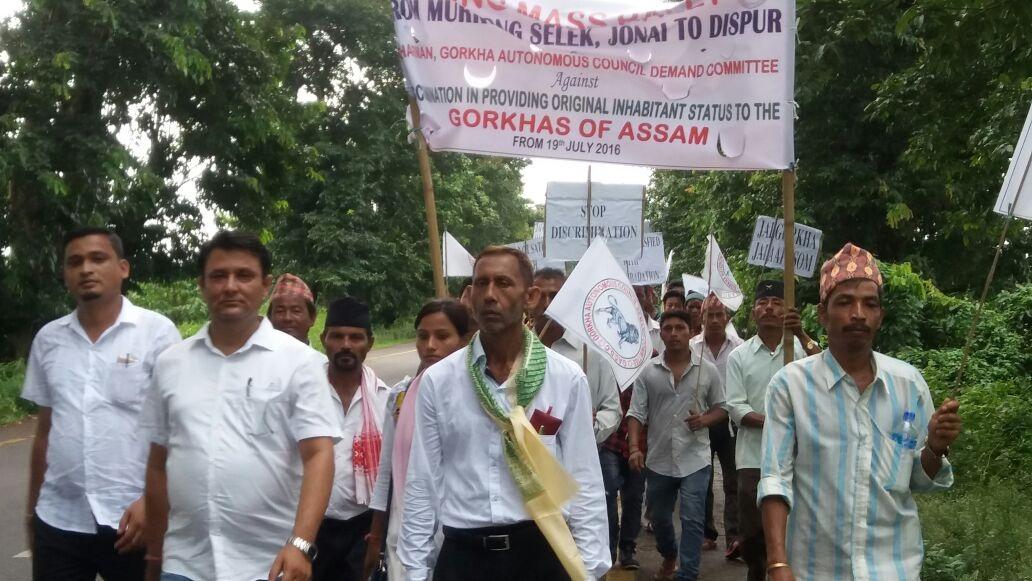 While starting off the rally from Murkong Selek yesterday Gorkhafa of Assam Harka Bahadur Chetry said, ‘Gorkhas of Assam have settled since time immemorial and have extensively contributed to national building process and the freedom struggle movement so denying Original Inhabitant and Indigenous status to Gorkhas in Assam in up-gradation process of NRC is sheer discrimination and attempt to deprive fundamental rights of genuine Indian citizens. The Marathon March which will be peaceful non-violent democratic rally without slogans and blockades from 6am to 6pm every day till reaching Dispur is our way of registering our protest against this conspiracy and saving the fundamentals rights of Gorkhas’.

‘I welcome Civil Society Organizations, Non Government Organizations (NGOs), Mahila Samities, Associations, Unions , Federations,  Students Union, Youth Organizations and  Clubs, Foundations, Trusts, village development committees, Gaon Burahs, people holding public office, youth committees, organizations or any group also individuals  in any domain willing to extend their support and can contact Chief Secretary GACDC Sanjib Chetry and Vice Presidents Keshab Pandey and Raju Chetry who are marching along with me. I thank one and all  who participated today and covered a distance of 32 kilometers from 11.40am to 6.40pm today and expecting more participation from all walks of life’, said Harka bahadur Chetri while interacting with media at 7.30pm at Talem under Jonai subdivision.

Hundreds of Gorkhas waited in the roadside to have a glimpse of Gorkhafa and extend their support. Localities residing near the national highway arranged refreshments and lunch for their respected leader. Women, school children, students joined the marathon march as token support. GACDC office bearers said that  the numbers will rise and support will swell as the program progresses and it is very important that we extend support in all forms to our leader. GACDC has sought support and blessings for Gorkhafa from all quarters of people for peaceful and successful Marathon March.

2 Nov 2011 - 4:49pm | drgits
Women play the key role in each and every family. In today's world women are walking parallel to men leading the world and the society towards progress. Women represent the beauty of a Country...

25 Feb 2012 - 3:24am | editor
Power minister Pradyut Bordoloi inaugurated the 2nd machinery mart 2012 at a function in Guwahati on Friday. Renowned manufacturing companies displayed their best machineries in the mart being...