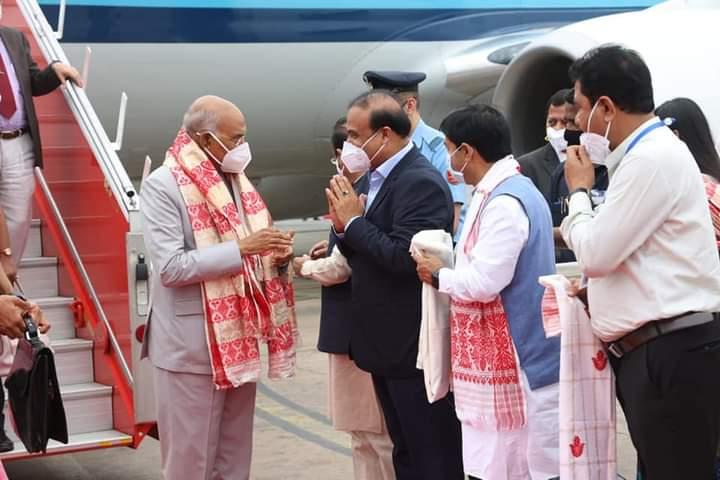 Tamulpur, BTR: President Ram Nath Kovind arrived in Guwahati this afternoon, was recieved by Governor of Assam Prof. Jagdish Mukhi and Chief Minister Dr. Himanta Biswa Sharma at LGBI Airport. President Kovind will deliver the keynote address at the 61st annual conference of the Bodo Sahitya Sabha (BSS) as the Chief Guest of the Open Session in Tamulpur, western Assam, on Wednesday.

Talking to this correspondent, Bodo Sahitya Sabha president Toren C Boro said, " Since no President of India has ever attended any Sahitya Sabha conference in the northeast region. It would be a historic occasion. We will greatly benefit from his wisdom and guidance"

"It is the first time in the history of Bodo Sahitya Sabha that the President of India will attend the session of Bodo Sahitya Sabha. The reception committee is now ready to welcome more than 1 lakh people," said U G Brahma, Assam Minister for Handloom & Textile, Soil Conservation and Welfare of Bodoland,

This year, the session is focusing on 'Stop Food Waste'.

Deputy Chief Executive Member of Bodo Kachari Welfare Autonomous Council (BKWAC) Romeo P Narzary on being asked about his excitement regarding President of India visit to the BSS session said, 'It will officially be the first time in my knowledge in the history of Raisina Hills Rashtrapati Bhavan  that the President of India in office will attend and address regional language literary conference in Assam.'

' I am sure it will immensely benefit the community in particular and the society and  state at large. I must thank and congratulate BSS and its leadership for inviting the President to Bodoland and giving us an opportunity to hear from his excellency about literature, culture, community and society,' added Basumatary.

The BTR government has declared a local holiday in five districts of BTR while the state government granted special casual leave to state government employees to attend the conference in Kachubari, Tamulpur newly created district of BTR.

Bodo Sahitya Sabha is preparing more than 40,000 scientific and technical terms in the Bodo language which is a scheduled language recognised in the Constitution of India. Bodo Sahitya Sabha was founded in 1952 and has been working for the development of literature, culture, and language. It plays a leading role in maintaining coordination among different ethnic groups.

24 Sep 2015 - 9:07pm | Momina Wasim
In major relief for the flood-hit people in Dibrugarh, two non governmental organizations have set up three camps to help these lot get out of the blues. Educated Unemployed Welfare Society...

No to Mega dams, Let the Rivers flow free

15 Mar 2017 - 1:48am | AT News
The Centre for Research and Advocacy, Manipur in association with the Citizens Concern for Dams and Development, Sibilong Village Authority and Toubam Village Authority celebrated a Two day...