A number of water supply schemes in the potable water crisis-hit Raha has been languishing in dying agony thanks to the lackadaisical attitude of the public health engineering department.

The schemes, mostly, started a couple of years back. But the things refused to progress beyond a stage much to the utter disappointment of the local residents who have been struggling for a drop of potable water for years.

Mention may made of the deplorable condition of the water supply scheme at Lauphulaborhi under the Dighaliati Panchayat.

“We heaved a sigh of relief as we came to see the stepped up works to lay the foundation stone of the project by MLA Piyush Hazarika on November 20, 2014. But now it is lying on a shamble,” said Mridul Hazarika, AASU leader.

Local residents and organizations here have blamed it all on the public health engineering department for allowing these to happen.

The AASU leader said, “Where is the PHE department? We hoped a lot. But only to be disappointed.”

According to information, during the last couple of years the department allocated funds for 16 water supply schemes. Four close associates of Piyush Hazarika got the award of contracts after the government released the fund in the name of the projects. But most of them have yet to see the light of the day.

Now what went wrong with these project? Who is to be blamed? How long will these projects remain in this utter dilapidated condition? Will the new government blink? 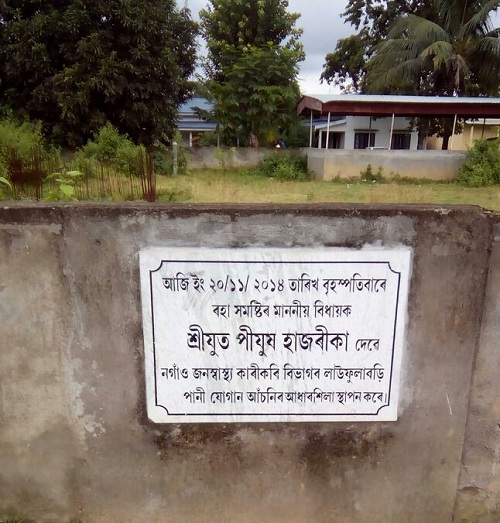 11 Aug 2015 - 1:41pm | Hantigiri Narzary
Speakers at a seminar in New Delhi on Tuesday stressed the pressing need for creation of smaller states in the country. Jointly organized by ABSU, BGP, JACAS, KSDC, IPFT and PJACBM, the...

24 Jun 2009 - 9:08pm | PrarthanaBanikya
Students from various schools and other concerned individuals along with Greenpeace, a global environmental organisation raised alarm about the increasing threat of climate change on the Indian...