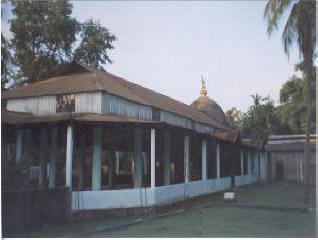 Assamese society is incomplete without a namghor- which is the spiritual and societal mainstay of their life back home. Earlier, the Assam Association, Delhi has provided a priceless gift to the people of Assam by establishing and commissioning the cultural centre, Srimanta Sankaradeva Bhawan in the national capital territory of Delhi at Qutb Institutional Area. To fulfill the aspirations of establishing a namghor the residents of Delhi under the stewardship of ‘Asamiya Kristi Kendra, Dwarka’ has taken up the initiative to set up a public ‘namghor’ at Shyam Vihar, which is at stones throw from Dwarka Sub-city, where more than 300 Assamese families have made home as a result of the successful co-operative group housing movement during last decade.

The Kendra has booked a plot of land measuring 800 sqyd at Shyam Vihar, which is estimated to cost about Rs. 80 lakhs. A fund raising committee under the convernorship of Mr. Manoj K Das, former General secretary of Assam Association, Delhi was formed to raise funds for the project. Kendra has devised a novel scheme of raising the funds through donations of minimum of equivalent of 1 sqft of land costing Rs. 1111/-. The donation can be in multiples of Rs. 1111/-. Names of the donors will be engraved on a plaque near the entrance. The donation may be sent favouring “ASAMIYA KRISTI KENDRA, DWARKA” to A-102, Pragjyotishpur Apartments, Plot-2, Sector-10, Dwarka, New Delhi 110075.

The Assamese society has increased its numbers slowly over the past few decades. Initially a very few came here on transfer/posting in the army, air force, central government jobs, parliamentary assignments etc. Everyone was nostalgic about Assam and was hoping to go back after the end of their tenures. However it’s been observed that the utopian thought of return of the prodigal son has remained in thoughts only, except for a very few. New progeny born and raised in Delhi finds very few commonalities in Assam and take up jobs/careers here, thereby forcing emotionally their parents to stay back in the capital city.

Large pockets of residential accommodations have come up in various areas. Most of these are in NOIDA, ROHINI, DWARKA, GURGAON, FARIDABAD. The success of the co-operative housing movement in Dwarka has made even middle class Assamese families to own flats at moderate cost. Pragjyotishpur Apartments is one such society promoted by the members of the Assam Association, Delhi. The market price of these flats have skyrocketed in recent years due to commissioning of the metro rail services and opening up of access roads from airport and NH-8. There are quite a number of families in NOIDA, who bought plots from NOIDA authority in initial allotments. All these people have increased their wealth due to uptrend in property prices. Techie Assamese have made Gurgaon their home. Now there are separate Assam Associations in Gurgaon as well as Faridabad.

In continuum to the colonization process, one latest such mass buying of landed property can be seen in Shyam Vihar. The colony was an un-authorized privately developed township within Delhi state. About five years back droves of people started buying plots at very low cost ranging Rs. 5 to 6 lakhs a kotha (Rs. 1800~ 2000/- a sqyd.). This colony has now approx. 500 Assamese members according to Mr. Pawan Sarma, the developer of the colony. The colony is taken up for regularization by the Delhi government. Predictably the prices have gone up 5 to 6 times in last 3-4 years, creating wealth for the average man. In near future Shyam Vihar will become the largest cluster of Assamese people owning plots in Delhi.

Therefore location of the ‘namghor’ in Shyam Vihar will provide the critical mass for successful operationalisation of the facility. This will also provide a place for the people to conduct their spiritual activities which fulfilling aspirations, which was long felt.

28 Nov 2012 - 5:04pm | editor
Assam Human Rights Commission on Tuesday urged introduction of human rights in the syllabus of primary and secondary school and at the college level. Delivering the Second Surendra Nath Sarma...

Assam to take part in Rowing Championships at Bangaluru

24 May 2013 - 11:09am | Raktim Baruah
The 16th Sub-Junior & 17th Challenger Sprints National Rowing Championships  organized by The Rowing Federation of India & Karnataka Amateur Rowing Association will be...

Rajnath Singh on visit to Assam

24 Dec 2014 - 7:00am | AT News
Union home minister Rajnath Singh is on a stock taking visit to Assam today a day after NDFB-S militants killed over 50 Adivasi people in its five dreaded attacks in Kokrajhar and Sonitpur districts....