The 193-paged book written by Dearson Zimik headman of Kachouphung village in northern Ukhrul, presents a wide spectrum of Tangkhul cultural and traditional aspects with colourful illustrations including festivals, rituals and ornaments. 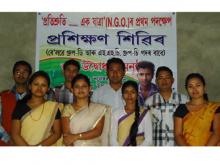 27 Nov 2012 - 3:31pm | Dibya J Borthakur
Nine youths of Saragaon , a sub-urban area of Raha Town have set an example of good work and send an inspiring message about youth works in their locality. Having identified unemployment a...