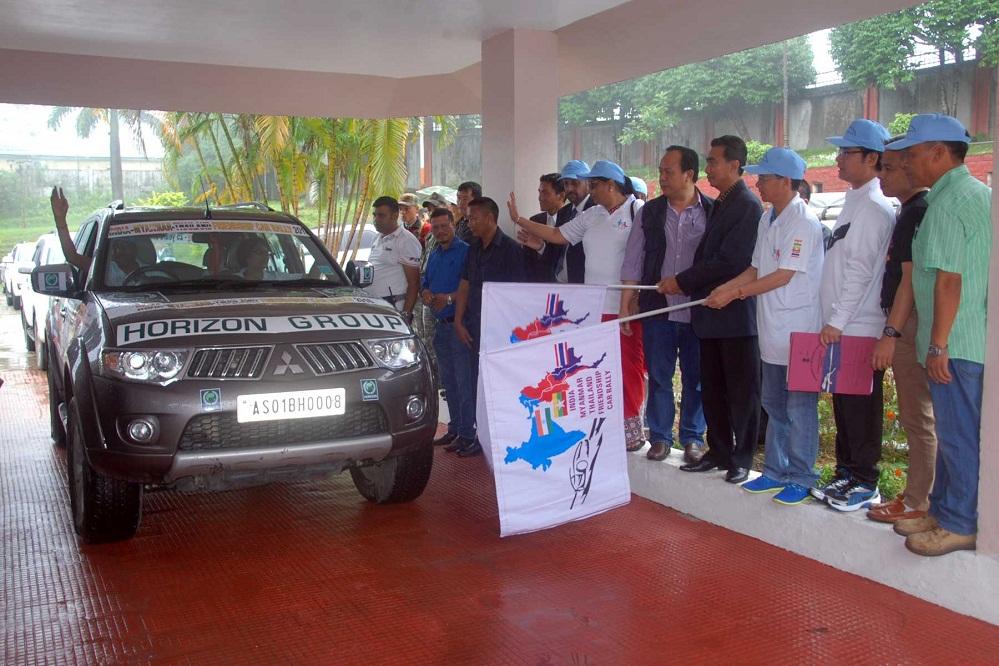 A fleet of 7 cars out of total 12 cars were flagged-off from Itanagar in Arunachal Pradesh to Bangkok in Thailand that will cover and explore a distance of 7000 kms over a period of 19 days from May 22 to June 9 traversing through some of the important cities of Yangon, Mandalay in Myanmar and Chiang Mai, Bangkok in Thailand. Rest of the cars in the rally will join the fleet in Karbi Anglong (Assam), Dimapur (Nagaland) and Imphal (Manipur). The travel route of the fleet originating from Itanagar (Arunachal Pradesh) will travel through Dimapur (Nagaland) - Kohima (Nagaland) - Imphal (Manipur) - Kalemiyo (Myanmar) -  Mandalay (Myanmar) - Taunggi (Myanmar) - Keng Tung (Myanmar) - Chiang Mai (Thailand) – Phitsanulok (Thailand) will culminate at Bangkok (Thailand). Along with the car rally, business marker events will be organized in countries en-route to connect with the industry and the common man.

The Department of Tourism and Arunachal Pradesh Tour Operators Association (APTOA) are the two teams from Arunachal Pradesh participating in the tri-nation car rally. The rally is being led by officers from Department of Tourism that includes Karma Leki Director Tourism, Tsering Norbu, Hilot Mugli and Takom Kena and the team from APTOA includes Duyu Tamo, General Secretary APTOA, Tadar Robin and Pem Tsering both members of APTOA.

The first ever rally in the State is being organized by the North East Federation on International Trade (NEFIT) in association with Union of Myanmar Federation of Chamber of Commerce and Industries (UMFCCI) of Myanmar, Federation of Thai industries Bangkok Thailand with support and cooperation of Department of Tourism, Government of Arunachal Pradesh.
Speaking to the media person, Minister Counselor Royal Thai Embassy New Delhi,  Tharadol Thongruang expressed hope that the event could foster friendship, strategic partnerships and bilateral relationship and  bridge the gap of trades policy and overland trading, develop tourism potentiality and enhance the scope of economic prosperity of these countries. Overwhelm by the hospitality of the State, Tharadol said that it is like to be at home when he is in Arunachal and informed that his people from Thailand will love to visit Arunachal Pradesh as this place is gifted with nature’s bounty unlike Thailand which had to develop artificial attractions and people of Thailand loves mountain, nature and snow.

2 Jan 2018 - 11:51am | AT News
KOKRAJHAR: Top NDFB-S rebel B Bidai finds place in the updated NRC draft notified on Sunday midnight. His name figures along with his wife Neina and other family members. Bidai hails from Auxiguri...

8 Jan 2018 - 12:36am | AT News
TINSUKIA: Two ULFA -I rebels are believed to have been killed when they had a fierce gun battle with security forces in Tinsukia district on Sunday. The encounter which took place for nearly two...

13 Nov 2014 - 9:50pm | AT News
Firing is back along the Assam-Nagaland border creating panic in Golaghat district. The epicenter is again Uriamghat bordering Nagaland where unprovoked firing by miscreants left one person and seven...