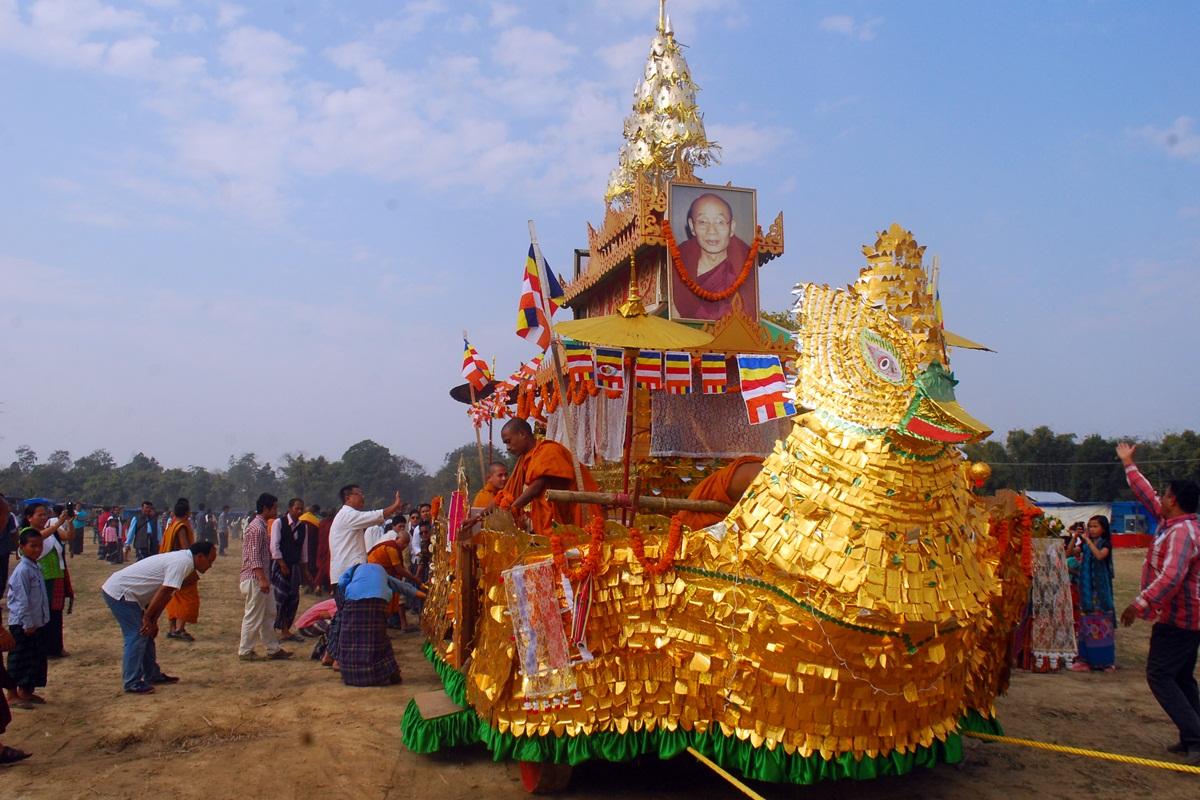 Thethree-day grand chariot festival locally known as Poi-Leng got started today at Namsai Poi-Leng Ground at the bank of Dihing river with great enthusiasm and participation of large number of people from all walks of life. The Poi-Leng celebration is held in honour of Late Venerable NyanapriyoBhikkhuMahathero of Port-Blair, Andaman who attained Nibbana (Nirvana) on January 8, 2016.

The festival started with hoisting of World Buddhist flag, offering of breakfast to BhikkhuSanghaand chanting of mangalacharan. People in great number thronged the ground to witness the installation of mortal remaining of Late Venerable NyanapriyoBhikkhuMahathero to decorated chariot from Nibbana (Nirvana) Temple and to drag the chariot constructed temporarily to preserve the mummified body of the venerable one. The body of the venerable one will be kept in chariot for three days from today and people from all walks will have the opportunity to pull the decorated golden swan chariot.

The Poi-Leng is the celebration of reflection of possession of a noble soul of Late Venerable NyanapriyoBhikkhuMahathero who during his life span of 68 years has spent 43 Vassa (monkhood) since his higher ordination to Bhikkhu on May 30, 1973. With his death (nibbana) the entire Buddhist community has lost a respectable Buddhist Bhikkhu who was loved and respected by all people irrespective of caste, creed and religion.

The Poi-LengCelebration Committee under the guidance of Venerable Abbot of Namsai PriyattiSasana Buddha Vihara Venerable B. AggadhammaMahathero has ensuredall effort to make the Poi-Leng celebration a successful event. Community feast for all during the three days celebration is arranged and will be kept open at the venue.The main attraction of the festival is the decorated golden swan designed chariot with 6 wheels constructed and built in 22 days by Venerable SobhitaBhikkhuof Borpathar Buddhist Temple KarbiAnglong (Assam) with help from 10 other monks, novice and Kappiya (disciple) at the Bank of River Noa-Dihing. The 6 wheels on the chariot signify the quality of greatness of Dhamma of the late venerable one. The chariot has three layers, all items donated by various people are placed in the first layer and in the second layer the lifeless body of the venerable one are placed and the third layer is shaped like a temple. The number of layers in the chariots can vary.

The lifeless mummified body of Late Venerable NyanapriyoBhikkhuMahathero was preservewith great respect and honour for 1 month at the bank of river Noa-Dihing in Nibbana (Nirvana)Kyong (Temple) at Namsai Poi-Leng Ground from January 9. The lifeless body was preserved by mummifying with cotton cloth dip in wax and covered with tobacco leaf.

Illumination of candles was the other attraction of the event for today.

11 Mar 2019 - 9:53am | Shajid Khan
In a bid to enlighten the journalists,media researchers,journalism studenrs on fact-checking to ultimately identify fake photos, videos and other contents spreading misinformation and fake news in...

8 Jul 2014 - 7:54pm | Hantigiri Narzary
The All Assam Bodo Peoples’ Confederation (AABPC), a new platform aiming at keeping to united all Bodo groups across the state of Assam  was formed at a general meeting held at Tribal Rest...