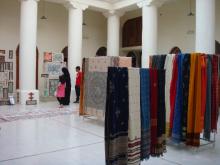 Festival of India In Kuwait

17 Apr 2014 - 7:49am | AT News
Amid massive security arrangement, repolling is underway with brisk note in nine Barak Valley booths on Thursday.Repolling began from 7 in the morning in 2 booths under Silchar constituency.Voters in...