The party leader and workers of All India United Democratic Front (AIUDF) of Kokrajhar east (No.30) constituency  committee urged the central committee to declare Manu Borgoyary’s  name as candidate in immediate to pave way party working in the constituency to contest scheduled second phase assembly election on April 11 next. 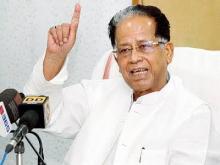 Will NRC be a meaningless exercise?

3 Jan 2018 - 6:53am | AT News
NEW DELHI: Senior Congress leader Tarun Gogoi said the ongoing process to update NRC will be a meaningless exercise if the Centre ensures safe passage of the Citizenship(Amendment) Bill,2016 in...

4 Mar 2014 - 2:38pm | AT News
A police man has been suspended in Guwahati for inhuman torture he inflicted on a city bus driver who refused to pay hi m money.The incident took place in Jalukbari area in the city where the...