Nazira: A full scale period of murder and mayhem is on the cards along the Assam-Nagaland border if what prevails at present is any indication.

Our correspondent stationed at Geleky reports Hundreds of people residing in the area have fled to safer places from Thursday while some others are getting ready to flee with bags and baggage’s apprehending fresh attacks from Naga miscreants.

Most of them hail from the Ougurijan Tea Estate which is situated along the Bihubor-Naginimora Road. Some courageous people are maintaining a strict vigil to foil any attack by miscreants on the estate.

AASU has indicated that it will not end the economic blockade while the Konyak Union has yet to withdraw the ultimatum it served earlier.

Speaking to Assam Times, AASU leaders said on Monday that they are not going to end the blockade and will not care even an iota to what the Naga union says adding that only an amicable solution to the border disput will force them to end the blockade.

“We are committed to protect Assam’s border and to provide security to the life and property of the people living along the border with Nagaland,” they said. They further added that Dispur should even enter Nagaland territory as the occasion demands to apprehend the Naga miscreants involved in the killing of two persons at Galeky in Thursday.

Top ranked AASU leaders held talks on Monday in Nazira with the police and civil administration. The AASU leaders demanded the district administration to provide more security to the people living along the Assam-Nagaland border in Sivasagar district.

Later Assam Police referred names of 10 people from the Nagaland side to their Nagaland counterparts to apprehend them immediately for their involvement and to hand them over to Assam for necessary proceedings.

In yet another development, a meeting of various organizations, village heads, student leaders and prominent citizens of Nagaland at Namtola on Monday unanimously resolved to discuss the current situation with AASU, ATASU and other organizations of Assam to end the economic blockade.

Those hailing from Naginimora and Namtula in Mon district deplore that they are bearing the brunt of the misdeeds by a few local goons of Mukokchung.

According to information received, the situation became volatile as soon as two activists of AJYCP got injured when a Maruit Omni Naga vehicle carrying two Naga police personnel, tried to speed away.
during the 24-hour economic blockade called by the Jorhat district committee of the Asom Jatiyatabadi Yuba-Chatra Parishad and other regional units of the body on the Mariani-Mokokchung Road on Monday AJYCP general secretary of the Jorhat unit Jibakanta Bora claimed that two of their activists were injured as the vehicle tried to run them over.

Later the angry AJYCP activists caught the two Naga police duo and damaged the vehicle. The Mariani police have taken custody of the two people alongwith the damaged vehicle.

16 Dec 2008 - 6:01pm | Daya Nath Singh
Guwahati Municipal Corporation (GMC) has been totally failure in providing basic amenities to the citizens of the city. Despite getting sufficient funds from both the Central and state governments,... 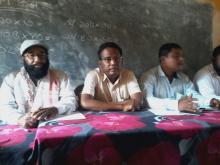