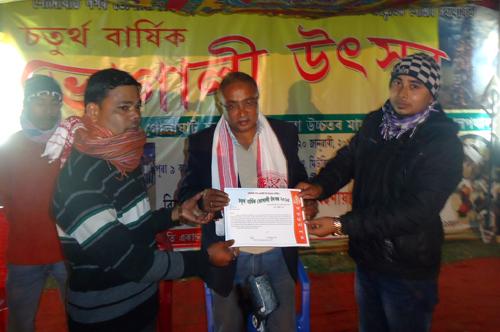 Fourth Bhogali Bihu Utsav was celebrated by the members of Golaghat Nagar Bhogali Bihu Udjapan Samittee at Govt. Bezbaruah Higher Seconday School playground on Friday. A colorful musical event was organsied as part of the event.

26 Jan 2020 - 1:11pm | AT News
A group of ASSU and AJYCP activists today waved black flags to minister Dr. Himanata Biswa Sarma. They were protesting against the Citizenship (Amendment)Act in front of the Nurul Amin Stadium...

15 Feb 2014 - 11:58am | AT News
Two persons died and four others have been injured at a tragic road mishap in Tezpur on Saturday.The incident took place in the morning at Bihoguri area where the vehicle bound for Guwahati carrying...