Stop battle of birds and buffalos

Traditional fights of birds and buffalos would soon come to an end in the time of Magh Bihu. Animal lovers across the state are dead opposed to the idea.

“Why two buffalos should be brought to a battle only for our entertainment? Isn’t it an act of cruelty?,” said an animal lover who said that we should take pains at this tradition.

Another animal activist said, “We should leave the birds to fly freely. But what we do is painful. I don’t understand what entertainment we get when two bulbul birds after weeklong torture are fielded to fight in public.”

A circle of animal lovers told Assam Times that the birds and animals should not be allowed to bear the brunt of an age old tradition.

This time the animal lovers are publicly opposed to the bird and buffalo fights for entertainment. In a letter chief minister Tarun Gogoi, Humane Society International has urged the government to stop the practice which normally take place in Magh Bihu mainly in Sivasagar, Nagaon, Morigaon and Kamrup.

They deplore that the buffaloes are forced to participate in fights for a reward of Rs 10,000 or more. The tradition pulls huge crowd in Ahatguri.

Bulbuls or ‘songbirds’ as they are known, protected under the Wildlife Protection Act, 1972, are reportedly captured from the wild by villagers who then train them by intoxicating their food with marijuana and starve the bird a night before the fight.

The Supreme Court had already passed an order prohibiting all animal races and fights, thereby directing the Animal Welfare Board of India and the government to prevent infliction of unnecessary pain and suffering to animals. The order also ensures that animal caretakers shall not incite any animal to fight against a human being or another animal. 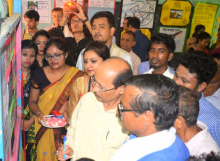 13 Sep 2017 - 5:12pm | AT Staff Reporter
The students of Assam Agricultural University (B.Sc Agri.) who had been undergoing the Rural Agricultural Work Experience programme in Puronigudam,Nagaon inaugurated the full fledged Farmers'...