A team of Assam Rifles 43 co. nabbed an ULFA linkman identified as Ratan Pator hails from Bamunimaidam, Guwahati, on March 26 night on part of their routine check at Woloowoni Chariali under Kaliabor Police station. Along with Pator, one Binoy kumer Singh, a member of K C P, a terroist organization of Manipur, is also nabbed. The both men were travelling from Guwahati to Tezpur in a night bus. No arms and ammunition recovered from them.

The two are now being interrogated by Police.

Fishing on the highway!

18 Mar 2018 - 11:31am | Mithun Baruah
MARGHERITA: In a bid to highlight the pathetic plights of the National Highway No 38 in Margherita many local residents living on the roadside resorted to mock fishing and cultivation Saturday.... 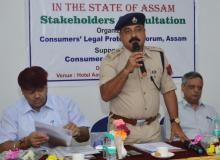