Having spent a considerable amount of time in the remote north-eastern part of India while growing up, I was exposed to what I now can understand better after reading and listening to Osho. What seemed strange at that time has unfolded now as a beautiful vision for me.

During that time I had many friends who would share with us exceptional examples of the village shaman curing many diseases with the blessings of supernatural powers. It was quite amazing to watch rituals people performed before they axed a tree. People made offerings on a leaf platter containing betel nuts and leaves, some turmeric powder, rice, burning incense and a few coins and apologized to the tree.  It was an absolute wonderful experience to live with people who connected so beautifully with nature.

Donyi-Polo, literally translated means Sun-Moon, is an animist religion of the Tani and other Tibeto-Burman people in Arunachal Pradesh. Sun and Moon represent female and male energy forces, similar to the yin and yang of Chinese culture.

The tribes of Arunachal Pradesh such as Galos, Adis, Apatanis, Nishis, Hill Miris, and Mishings follow this religion. According to a 2001 census, there were around 337,000 people practicing the Donyi-Polo religion. However, to call Donyi-Polo a religion is misrepresenting the essence of the very experience with nature.

“There have been secret methods to get energy from the moon and from the sun too. Sun worship was born out of a certain technique; great temples of the sun arose. The sun temple of Konarak was just an expression of gratitude to the sun. It was not just worship, it was a science - how to get yang energy in you. It is particularly good for women to get sun energy in them so that their hidden, dormant yang becomes active, and it is good for men to get moon energy so that their dormant feminine principle becomes alive, moving again. It is good for a woman to be a sun worshipper and good for a man to be a moon worshipper.”

Some anthropologists observe that Donyi-Polo is probably derived from the pre-Buddhist Bön religion of Tibet which, according to the Bön, originated in ca. 16,000 BCE. Donyi-Polo focuses on the worship of the sun and moon, considered the eternal watch deities of the supreme gods, Bo and Bomong.

Followers of the Donyi-Polo tradition believe that all people of Arunachal Pradesh share a common ancestry from Abotani. The religion has no written scriptures, but has traditionally been passed down orally from each generation to the next. Believers pray to a number of spirits, deities and souls for blessings, but they principally worship the sun (Donyi) and the moon (Polo) as the visible forms of the gods.

It is the analogy through which the Divinity (Sedi) can be described, representing the way in which the divine principle manifests itself, that is: eternally veiling, unveiling and then revealing himself in nature; providing harmony and balance to the universe, for example in the alternation of light and darkness, heat and cool, or unity (analogically, the Sun of the daily sky) and multiplicity (analogically, the stars of the night sky).

The practical expression of the faith in Donyi-Polo can be found in the daily life and actions of people: they call themselves "Donyi O, Polo Ome", meaning "children of the sun and the moon". When a believer is distressed he invokes "Donyi-Polo". If a man is falsely accused of lying he invokes "Donyi-e!", "oh Sun!". All these are expressions of faith in Donyi-Polo upholding providently the world, rewarding the righteous and punishing wrong-doers. The divine pair is revered as the highest holy figure governing fate.

"Donyi-Polo" is also used in the sense of "truth" in sacral speech and is an epitome for wisdom, enlightenment, right conscience, truthfulness, and selflessness. Aware people are called "Donyi-Polo Ome", which means "children of truth", and elders are regarded as "Donyi-Polo Abu", "representatives of the truth".

Donyi-Polo includes religious rituals that coincide with lunar phases and agricultural cycles. A follower of Donyi-Polo believes in the oneness of all living creatures, from the tiniest of organisms to the mightiest of animals, and that every living creature has a role to play in his or her life. They believe that a spirit (or soul) resides within all men, plants, animals, and the land that nourishes them, having a strong connection with humans.

While Arunachal Pradesh is still largely animist unlike the other north-eastern states which have become heavily Christianised, the number of Christian converts has actually increased over the years.  Christianity has become a sensitive issue. The number of Christians increased to about 18 per cent of the sparsely populated state of a little over 1 million in 2001 from 10.3 per cent in 1991. In the mid-1980s, in Arunachal Pradesh, long isolated from the rest of India to protect the faith of tribes from Christian missionaries, efforts were made to give an organised form to the traditional beliefs and values of the region, and to protect the locals against coerced conversion to foreign religions.

Supporters of the revival of Donyi-Polo have coined the slogan ‘Loss of culture is loss of identity’ which has become very popular. The indirect implication is that those who convert to Christianity lose their culture and hence their identity. On the other hand, some Hindu groups now accuse Christian missionaries of using inducements such as schooling to lure poor people to the faith, and have also launched a movement to reconvert many tribal Christians back to Hinduism.

It seems the major religions are still not done trying to convert more people to their ‘only true religion’. They would merrily crush the freedom of the indigenous people, destroy any individuality they personify to add to the numbers of their flock. May the Donyi-Polo remain strong, different  and independent, and their way of life in their remote region protected.

15 Feb 2014 - 4:12pm | AT News
Chief Minister Tarun Gogoi on Thursday asserted that he would keep helping the poor people.Talking to reporters at the Assembly premises after countering the Opposition on the vote on account, Gogoi... 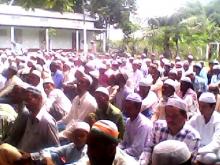 10 Aug 2013 - 2:25pm | Rafique Ali
Festival of Happiness of Muslim community - Eid-ul-Fitre is observed at Punia, near Kharupetia where thousands of Muslim cultivators live on August 9. About three thousand people gathered at Eidgah...