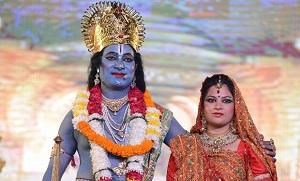 Hindus have chosen a beautiful word, Ramleela, to signify the drama of Rama's life. Leela means play, which implies an abundance of energy. Only Hindus have the concept of play in their religion. They say, "The world is God's play- leela." Leela means there is so much overflowing energy, just to sit idle is impossible! The energy is overflowing.

There is no destiny, no fate for God. He is beyond destiny. Flowers bloom, the moon shines and the stars twinkle for what? Why do rivers and streams flow?

Because God is. The day our life current gets adjusted to the right wavelength, we will find purpose disappearing from our lives. That is why we refer to the lives of Rama and Krishna as leela and not as biography. Their lives are a play, a sport, a frolic, a festival!

In India we perform the Ramleela every year. We go on performing it every year just to create the same milieu again. When someone acts the part of Rama, it is not only that he is acting Ram. In fact, in villages where the people have been untouched by today's concepts, the person who is playing Rama is Rama. They touch his feet. He is not an actor; he is Rama revived. The milieu is created. They chant poetry, the whole story is unfolded.

This is miraculous too because nobody gets bored with the same story again and again. But even though everyone already knows the whole story when Ram leela is unfolds, everyone is thrilled. It is ram: alive again Re-enacted. It is not only a stage, but the whole world.  A certain milieu is being recreated and the villager who is watching the play is not only seeing a drama he is part and parcel of a great spiritual phenomenon. He is in it! As the story unfolds, his heart is unfolds too.

History is always of the dead past. It has no future at all. But it dictates the future.

Osho says: Myths should be continued. They open into the future. History should be discarded. All that is meaningful in the past must be made into a myth not a history. It must be thought about in terms of poetry not in terms of temporal events. Poetry is never a closing; it is always an opening. It is never limiting. You can give poetry your own meaning; you have a certain freedom. But not with a newspaper. The more down to earth the record is, the less free you are. You cannot give it a meaning. You cannot relive it, you cannot create it. You cannot be creative with it; you can only be passive. What can you do? Hitler is born in a particular year - how can you be creative about it? It is a dead weight; you can only be passive with it. But with Krishna, you can be creative. There is no date. In a way, he is never born. You can give birth to him anytime. With poetry you are at liberty; with myth you are at liberty. You can create... and when you create, you are also transformed. In creating, the creator is always transformed by his own creation; he never remains untouched.

History is a very worldly thing and myth is a record of all that cannot be recorded, but that which can be indicated. Hindus do not say 'the history of Rama'. We say 'the story of Rama': Rama Katha. It is not accidental because we give more importance to a story than to a history. With a story there are possibilities and history is a dead thing with no possibility.

A myth can indicate, can show something about it. It is not a bare statement of events. It helps the reader or watcher to go deep into the poetry of the myth and the imagination what Jung calls 'archetypes' - he might get a glimpse; he may be able to know what has happened beyond history. He may be able to know from deep down within themselves himself. Only from within something can happen which will be in tune with the nontemporal, which can be in communion with the nonhistorical. With what Tulsidas has written, one can again relive the whole phenomenon. Time will be transcended and he will again be in the time of Rama. There will be no space/time relationship. Deep within he will be in Rama's milieu as if Rama is present somewhere nearby.

24 Dec 2014 - 1:31pm | AT News
Three Adivasi people were killed when security forces sprang upon a huge crowd who took to the streets in Dhekiajuli on Wednesday in protest against the NDFB-S attacks where 37 killed in the district...

2 Oct 2012 - 3:51am | editor
Three persons were killed by lightning and two others seriously injured in Goalpara district on Monday.Two of them hail from a family when the five persons were inside a house at Nolanga Reserve when...

21 Mar 2014 - 10:02am | AT News
Yet another AGP leader is likely to join BJP. He is none other than Padma Hazarika who is yet to make up his mind.Hazarika, who was suspended from the party for anomalies in the Rajya Sabha voting...

True Celebration Cannot Be According to the Calendar
Joy of Sharing
10 Great Ways to Connect with Nature
Jadav Payeng: The Forest Man of India
Osho- The Master of Meditation and Silence
Depression- from breakdown to breakthrough
University: to become one with the universe
Emancipate yourself from mental slavery
Transformation – An Antidote to Terrorism
Invocation of the Devi of Shakti