An uneasy calm seems to have been prevailing Nagaon following a clash between businessmen and a section of violent protestors on Tuesday.

The incident took place at noon when a group of people took out a peace rally in Hoiborgaon seeking an end to bloodletting in BTAD.

The rally was peaceful when they submitted a memorandum before the Deputy Commissioner.

A section of the protesters turned violent after unidentified miscreants allegedly pelted stones at them.

The violent protestors attack a policeman apart from damaging a few shops in the town. Later police men brought the situation under control. Investigation is going on.

12 Jun 2017 - 1:08pm | AT Staff Reporter
The recovery of the dead bodies of one boy and a girl on railway tracks near Harisinga railway station in Udalguri district on June 12 has created sensation in the district.Police has identified the... 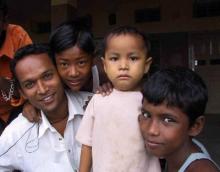